The hospital, in a statement, said there had been a “drop in pressure in the supply of liquid oxygen” on Thursday

Sixty children have died at a hospital in India’s northern state of Uttar Pradesh this week, prompting local media to blame the fatalities on a lack of oxygen supplies.

The BRD Medical College specified that 34 were babies who died at the neo-natal intensive care unit, while 12 died because of encephalitis. The rest died of other unspecified causes.

Local media reports have said some of the deaths were caused due to an oxygen shortage after a private supplier withdrew its equipment over unpaid hospital dues.

BRD Medical Chief Medical Superintendent Dr R.S. Shukla denied the deaths had been caused by a lack of oxygen supplies when asked by Reuters.

The hospital, in a statement, said there had been a “drop in pressure in the supply of liquid oxygen” on Thursday, but added cylinders were procured from various other suppliers. It did not specify whether that had resulted in any deaths.

The breakdown of the death toll provided by the hospital showed a spike on Thursday, with 23 fatalities, including 14 babies at its neo-natal unit. 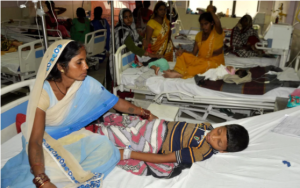 The Uttar Pradesh and federal governments are investigating the matter, officials said. A tweet from the Prime Minister’s office said Narendra Modi was constantly monitoring the situation.

The deaths have sparked a political firestorm as opposition politicians sought to pin the blame on Modi’s Bharatiya Janata Party, which rules the state.

The hospital is located in Gorakhpur district, which is represented by Uttar Pradesh chief minister Yogi Adityanath, who was appointed to head the state this year.

“The current government is responsible for the deaths of children in Gorakhpur due to the lack of oxygen. Strict action should be taken,” tweeted former Uttar Pradesh chief minister Akhilesh Yadav.

Outbreaks of encephalitis are common every year in India, claiming hundreds of lives, especially during the monsoon season. The disease is most often caused by contaminated food or water, mosquito bites, or through breathing in respiratory droplets from an infected person.

India spends about one percent of its GDP on public health, among the lowest in the world. Successive governments have faced criticism for not reforming the overburdened public health system which is still plagued with shortage of doctors and dilapidated infrastructure.