Wear your support on your face

After the Gay pride rainbows, Greek twibbons are now available to be added to social media photographs as part of a Greek Solidarity campaign. 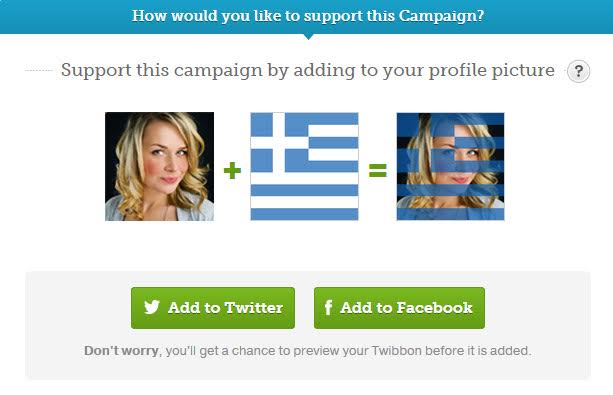 We, members of trade unions, political groups, and social movements from all over Europe, came together today in Athens in truly moving and historic times. Europe is at a crossroads. The institutions of the Troika are not only trying to destroy Greece; they are trying to destroy us all. Now is the time to raise our voices against this blackmail by the European elites. Next Sunday the Greek people will be able to vote to reject the blackmail that is austerity and vote for dignity – with hope for another Europe. This historic moment requires everyone in Europe to speak up and take a stand. We all say NO to austerity, pension cuts, and VAT increases; We all say NO to poverty and privileges; We all say NO to blackmailing and to the dismantling of social rights; We all say NO to fear and the destruction of democracy. We all say YES to dignity, sovereignty, democracy, and solidarity with the citizens of Greece. This is not just a conflict between Greece and Europe. It is about two antagonist visions of Europe: our Europe of solidarity and democracy, created from below and without closed borders; and their vision, which denies social justice, dismantles democracy, and opposes the protection of the weakest and taxation of the wealthy. Basta ! Enough ! Another Europe is possible ! Let us convey a loud and clear Europe-wide ‘OXI’ by participating in our own ballot, online as well as locally and symbolically in the streets and squares of Europe. In the heat of this historic moment, we call on the people of Europe, their trade unionists, political groups, organizations, and movements to visibly express their ‘NO’ to austerity on Friday all over Europe. Find your way to say ‘NO!’ ‘NON!’ ‘NEIN!’ ‘OXI!’ Sunday will be an important day for Europe, for us, the European people; for our dreams, for our hopes. But we know that it will not be the last stop on the road of hope in our common fight for another Europe, for and by the people. We will continue to defend democracy. Stand with Greece and SIGN the petition