Ekaterini Stefanidi won the Olympic gold medal in the women’s pole vault after clearing 4.85m in the final. Sandi Morris from the US took silver (4.85m), while the bronze went to Eliza McCartney (4.80m). Stefanidis’s medal brings Greece’s tally to six at the Rio 2016 Olympics, while it the first medal in the event since 1956 and the first in track field at Olympic Games since 2004. 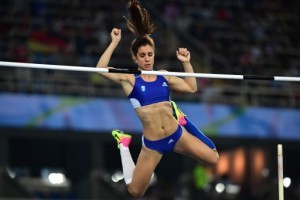