Europeans remain more enthusiastic about NATO than Americans despite falling support for membership among public in Britain, France and Germany.

The results of a new international YouGov study could make worrying reading for the leaders of NATO nations as the alliance celebrates its 70th anniversary today.

The survey, conducted in key NATO nations, finds that support for membership has fallen in several European countries over the last two years. 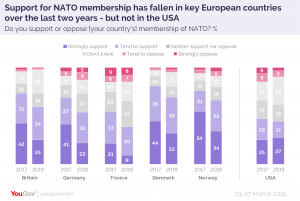 Fortunately for the alliance this drop in support is not accompanied by an increase in opposition –movement seems to be from supporting membership to the middle ground or “don’t know”. The proportion of people actively opposing their own country’s NATO membership has remained unchanged.

And in America, the backbone of the alliance, public opinion has changed far less drastically – Americans remain less enthusiastic about NATO membership than their European counterparts. Some 44% of Americans support being a part of the alliance, within the margin of error from the 47% who said the same in 2017. At the same time, opposition has fallen from 15% to 10%.

Two years ago, Donald Trump branded NATO “obsolete”. Our survey found a similar decrease in certainty when we asked whether NATO still had an important role to play in national defence, similar to the softening favourability towards the alliance.