A solemn group of Christians held their first prayer service in years on Saturday in the ravaged church of St Mary in Syria’s eastern Deir Ezzor city.

Stones, strips of wire, papers and remnants of rockets were strewn across the church floor, and bright sunlight streamed in from the blown-out windows.

Fighting has gripped Deir Ezzor since rebels captured part of the city in 2012, and grew worse when the ISIL jihadist group shot to prominence there in 2014.

Syrian troops recaptured the entire city in November and residents have slowly begun to trickle back.

Saturday’s service – which was also attended by Muslim clerics – was led by the silver-haired Syriac Orthodox Patriarch of Antioch, Ignatius Aphrem II. 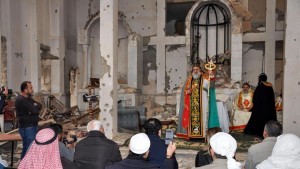 He presided over the service from behind a small table draped in a white cloth, as the church’s altar had been badly damaged.

“It’s an indescribable feeling for us to pray in a nearly-destroyed church, which serves as a consolation for our hearts and a message of hope to the people of the city to come back and take part in building it anew,” the patriarch said.

And Maurice Amseeh, a local bishop, called on Christians to return to their city.

“The important thing now is for life to come back – for Deir Ezzor’s residents and Christians to come back to it,” he told worshippers.

An estimated 3,000 Christians lived in Deir Ezzor before Syria’s uprising broke out in 2011.

Shadi Tuma, 31, decided to stay in his hometown despite years of clashes.

“The hard times that Deir Ezzor went through pushed the families to leave, but there was a determination inside of me to stay in this city,” he said.

Much of the city remains practically unlivable, with buildings destroyed, irregular electricity service and no drinking water.

“Prayer for me is like a new life,” she said.

“It gave me the determination to come back to Deir Ezzor and put up with the poor provision of services, and participate in rebuilding it.”