As the Syrian Civil War enters its eighth year, previously overlooked ethnic and religious groups, and the divisions and alliances between them have garnered more coverage and analysis. After years of war and the break up of traditional loyalties, groups that were previously suppressed by the Syrian government have been able to reach out to new allies, renew historic ties, or forge entirely new positions for themselves.

Some of the more commonly covered groups involved in the conflict include Kurds, who are seen as the main ally of the US in Syria the SDF/YPG. The Syrian Druze community, living in southern Syria’s Suwayda and Quneitra area, were increasingly covered by media following attacks by the Islamic State. Yazidis and Assyrians have also seen more coverage in the wake of Islamic State attacks and alliances built with the SDF and the International Coalition involved in Syria and Iraq. 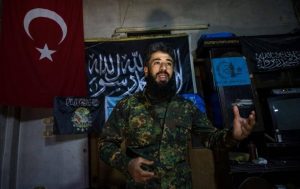 Although a large, and historically significant part of Syria’s diverse ethnic heritage, Syrian Turkmen have seen very little coverage as they re-assert their identity by forming own brigades, engaging in combat against the Syrian army and setting up political parties in Northern Aleppo.