The online edition of British Telegraph urges its readers to go to Athens “Now” if they want to experience the last burst of warm weather before winter sets in. In an article written by travel author Chris Leadbeater, the piece provides its users all the necessary information they need to enjoy the city in Autumn, a perfect spot for holidays.

Go Now
Summer lingers in Athens (thisisathens.org), which basks in a glow of 68F (20C) as October slips into November. A wide range of flights also make it a feasible destination. British Airways (ba.com) flies in from Heathrow, Ryanair (ryanair.com) from Stansted, Aegean (aegeanair.com) from Heathrow, and Manchester, easyJet (easyjet.com) from Bristol, Edinburgh, Gatwick and Manchester. 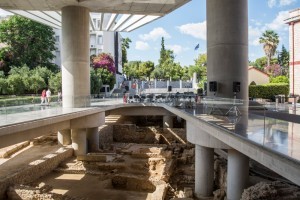 Stay
A five-star peering over Syntagma Square, the King George (1) has doubles for £191, room only. To the north east, St George Lycabettus(2) has fine vistas of its own from Lycabettus Hill. Doubles from £106, room only.

Walk here
Syntagma Square is one of Athens’s hubs – a broad space at whose east end the Greek Parliament (3) stands. Take a stroll along Mitropoleos and you pass the Metropolitan Cathedral (4), a marble joy finished in 1862. Further westward footsteps will bring you to Monastiraki Square, where a turn south on to Areos will proffer Hadrian’s Library (5), a second-century remnant of ancient Rome.
See this
The Acropolis (6) (odysseus.culture.gr; €20/£18) is an obvious but unmissable part of Athens, crowned by that majestic fifth-century-BC temple the Parthenon. The adjacent Acropolis Museum (7) (theacropolismuseum.gr; €5) mourns the Elgin Marbles with great replicas.
Try this
After 19 years in gestation, the National Museum of Contemporary Art (8) finally opened in November of last year. Its latest exhibition – of modernist sculpture and painting from the National Art Museum of China in Beijing – is in situ until November 14 (emst.gr; €2). 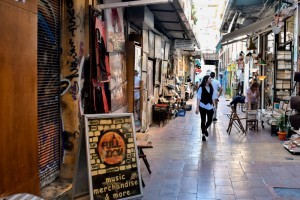 Shop here
Athens shows its flair for design at Mikos (9) (mikos.gr), which revels in funky sofas and cushions on Mitropoleos. To the north east of Syntagma Square, Kolonaki is a hub of chic stores like Box Architects (10) (boxarchitects.gr) – with its cool lights and clocks.
Drink here
Taf (11) (theartfoundation.metamatic.gr) is a hip watering hole in Monastiraki, with art installations in ruined rooms, and beers for €3. Meanwhile, Kolokotroni is dotted with some of the city’s best drinking venues – not least The Bank Job (12) (thebankjob.gr), which pours cocktails from €6 in, yes, a former bank. 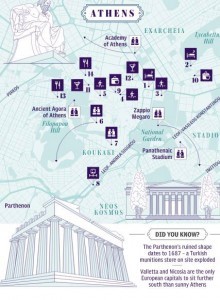 Eat here
Thissio and Psiri have the mother lode of Athenian restaurants. The former has The Sowl (13) (thesowl.com) – Latin fare such as shrimp tacos with guacamole for €5.50. The latter has Gostijo (14) (gostijo.gr), a Greek-kosher option whose stifado (beef casserole) is €15.
Off the map
Take Line 1 of the Athens Metro (stasy.gr; €1.40) south west from Monastiraki Square to the terminus at Piraeus – the port district that is intrinsic to Athens’s economy. See the flow of cruise ships from a bar such as El Chapo (elchapo.gr).