Divers searching for 12 boys and their football coach trapped in a flooded Thai cave over a week ago are near the area it is thought they were stranded.

Rescuers believe they are less than 1km (0.6 miles) from where the boys may be, but are blocked by a narrow tunnel.

Nothing has been heard from the boys aged 11 to 16 and their coach since they went to explore the Tham Luang caves in Chiang Rai on 23 June.

The hope is they sought safety on a mound in an underground chamber. 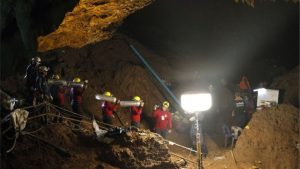 Rescuers have been helped by falling water levels inside the cave but are making slow progress.

The group’s plight has gripped the country and led to an outpouring of support and hope.

Heavy rain – and the knowledge they were not equipped for a long stay underground – has led to fears that the boys and their coach might not survive.

Rear Admiral Apakorn Yuukongkaew, commander of the Thai Navy Seals, said on Sunday that his divers had reached “chamber three” in the cave complex. 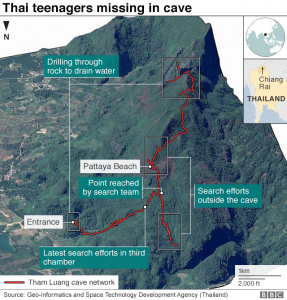 They had been forced back from that location by rising floodwaters earlier in the week.

From there they have to get to an area nicknamed “Pattaya Beach” after the well-known Thai beach resort city.

“It is hard because it’s dark and flooded. The most important thing for today is speeding up to reach the kids,” he told reporters.

They made further progress on Monday but now have to widen a section of flooded tunnel in order to reach the boys’ possible location.

Who are the group in the cave?

– The 12 boys are members of the Moo Pa – or Wild Boar – football team.
– Their 25-year-old assistant coach, Ekkapol Janthawong, is known to have occasionally brought them out on day trips – including a trip to the same cave two years ago.
– The youngest member, Chanin “Titan” Wibrunrungrueang, is 11 – he started playing football aged seven.
– Duangpet “Dom” Promtep, 13, is the team captain and said to be the motivator of the group.
– The club’s head coach Nopparat Kantawong who did not join the group on their excursion, says he believes the boys, who dream of becoming professional football players in the future, will stick together.
– “I believe they won’t abandon each other,” he told media outlets. “They will take care of each other.” 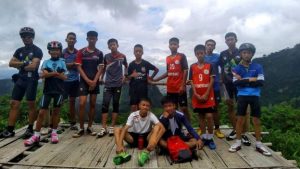 As well as the Seals, a team of international cave diving experts is helping with the rescue, but they are facing intensely difficult conditions underground.

Pumps are removing about 10,000 litres of water from the cave every hour but some sections are still flooded.

There is almost zero visibility in those areas, so divers are making slow progress. Provincial Governor Narongsak Osottanakorn told reporters on Monday morning that it had taken the team about eight hours to travel 600m.

Underscoring the dangers of the rescue scene, he also said four volunteers had briefly gone missing on Wednesday after entering the cave without letting co-ordinators know.

But they were at risk from infection from unclean water or contact with an animal inside the cave, he added.

Cave temperatures are believed to be between 20C and 25C (68F to 77F) and the porous limestone rock means there should be enough oxygen, although some caves in the region are known to contain bad air pockets with carbon dioxide.

Messages the children sent before setting off to explore the cave on Saturday suggest they had taken torches and some food.

Rescuers have also been searching through jungle on the mountainside for alternative entrances to the caves.

Experts have said there is a good chance the limestone cave does have other entrances.