Huge volumes of goods are moved around the world every single day for vast sums of money but which product can lay claim to being the most imported and exported? According to data published by Teletrac Navman, cars were the most traded item in 2016, accounting for 4.9 percent of global trade and a market value of $1.35 trillion. Germany was the world’s top car exporter that year ($150 billion) while the U.S. was the top importer ($173 billion). Refined petroleum is the second most traded item worldwide, followed by integrated circuits. 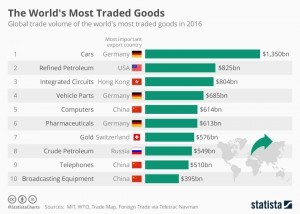