According to urban designers

Cars clogged the streets of Borehamwood, England, an outlying suburb of London, for decades. But in the mid-1990s, the town added new pedestrian-only areas to its center.
The change transformed the town, according to Esther Kurland, the director of Urban Design London, a nonprofit that connects urban designers and planners in the city.
“This was one of the first ‘traffic calming’ shared space schemes in the country,” Kurland tells Business Insider. “And I was fascinated in how the behavior of both drivers and pedestrians changed.”
Borehamwood is just one example of the way innovative public space can improve the lives of an area’s inhabitants. To find more, we reached out to urban designers and planners around the world. They told us about spaces that have been game-changers for cities, that inspired them to go into the field, and that they simply find stunning.
Here are 18 of the world’s most beautiful parks, libraries, streets, and plazas, according to people who design them for a living.
Millennium Park in Chicago, Illinois. 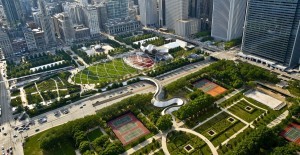 “It was clearly a game-changer, not only for Chicago and the real estate that surrounds the park, but for its influence on cities everywhere,” says Carol Coletta, the VP of Community and National Initiatives for the John S. and James L. Knight Foundation.
Coletta manages millions of dollars annually in grants for city design, and says Millennium Park is the ideal public space. Intended to celebrate the second millennium, the 25-acre park hosts public art and events.
“Lurie Garden, tucked in the park’s southeast corner, is one of my favorite places in the world that somehow manages to remain deeply calming in the midst of the chaos of the larger park,” she says. 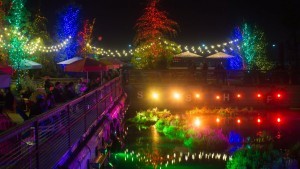 Bordering an urban beach, Spruce Street Harbor Park features colorful lights at night and hammocks for lounging.
It “was intended to be a temporary intervention — really a desperate move for a very tough location separated from Philadelphia’s Old City by a wide and busy road,” Coletta explains. “But it keeps going and going because people keep coming and coming. It is a simple, loving intervention whose design elements have been widely copied.”

The central square in Seaside, Florida. 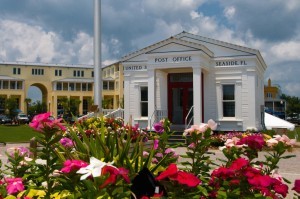 Building a new residential housing development that actually feels like a small town is almost impossible, says Steve Mouzon, the founder of Mouzon Design.
But the founder and developer of Seaside, Florida did just that, using public space to foster a new independent, tight-knit community.
“The developer had the audacity to build a town square, with a post office, a grocery, a bookstore, and a collection of other restaurants and shops with apartments above,” Mouzon explains. “Never mind that the post office wasn’t a sanctioned US Post Office, but rather ganged mailboxes installed inside a tiny civic building. Because the mailboxes wore civic clothing, people behaved in a civic way. And even though Seaside has never been incorporated as a town, people nonetheless behave in neighborly ways.”

The streets of New Orleans, Louisiana. 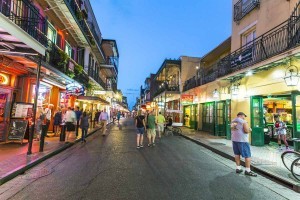 New Orleans’ street design is exceptional because they’re incredibly walkable, says Eric Kronberg, the principal of design and architecture firm Kronberg Wall.
“I had the really good luck to choose Tulane School of Architecture in New Orleans for college,” Kronberg explains. “I’ve spent the last twenty years since graduation returning to the city. I measure, photograph, and observe all the little things that contribute to the city on each visit. These typically unnoticed things like street width, block length, sidewalk conditions, relationship of buildings to the street, all represent dense, walkable urbanism at a human scale.” 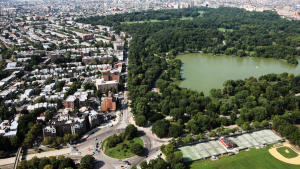 “It is so many things to so many people and really serves all of the communities around it,” Julie Ember, associate director of design at New York’s Bryant Park Corporation and 34th Street Partnership, says of Brooklyn’s largest park.
“It is simultaneously a beautiful escape into nature while being fully representative of the city and the human touch. It is a great balance of open-ended space and programmed space; and maybe most importantly, its landscape is really varied and interesting and never fails to surprise me.” 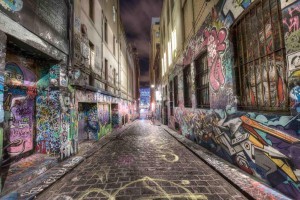 Hosier Lane is “a graffiti laneway in Melbourne’s city center that effectively brought about the gentrification of street art and legitimized its validity in the city’s modern culture,” says Dale Bowerman, who worked as an urban planner for the city of Melbourne. “Once upon a time, [it was] home to a Banksy artwork, which was accidentally painted over by Council workers.” 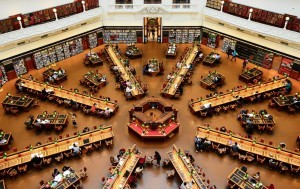 “The [reading room] dome was the largest of its type in the world on completion” in 1854, Bowerman says. It is “a place that citizens can always rely on for peace, quiet, solitude, and reflection.”
The octagonal space was designed to hold over one million books and up to 600 people, making it a welcoming space for visitors.

Strietzelmarkt is “the oldest Christmas Market in Germany. Booths fill the square, but also run for miles north from the Hauptbahnhof through the Strietzelmarkt, across the river, to Albertplatz,” says Craig Toocheck, a designer at the National Association of City Transportation Officials in New York City.
He adds that the market serves as a shared space, where people can congregate and hang out.

The main atrium of the Solomon R. Guggenheim Museum in New York City. 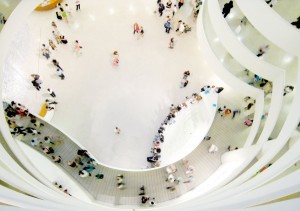 Though visiting the Guggenheim’s atrium is free to the public, you need to purchase admission to see the rest of the museum.
“As a public space, the grand rounded main atrium gallery of the Guggenheim Museum is a wonderful and inspiring lesson in organic architecture,” says William J. Martin, the founder of WJM Architects. “The entrance is deliberately very low as you pass through from exterior to interior. It is a poetic expression enhancing the art it displays.”
The Ryōan-ji Zen Gardens in Kyoto, Japan. 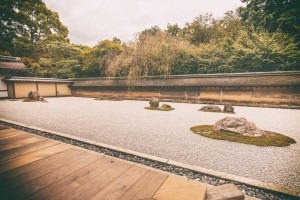 The Zen Gardens feature “patterns that are timeless, yet always changing, filled with stillness and life that call us to pay attention,” says Jonathan Rose, the president of Jonathan Rose Companies, a real estate development, planning, and investment firm.