Are we entering into a new nuclear arms race?

There are an estimated 14,555 nuclear warheads in the hands of just nine countries. At the top of the list, according to a list put together by the Federation Of American Scientists (FAS), are of course Russia and the U.S.
The two nations have a combined arsenal of over 13,000. Up to now, the two have been undergoing programmes of disarmament – of this 13,400, over 5,000 are officially retired and awaiting dismantlement.

In Russian President Putin’s annual state-of-the-nation address he made a number of provocative statements aimed squarely at the country’s international rivals. In particular, the focus was Russia’s nuclear arsenal, with Putin warning: “Russia still has the greatest nuclear potential in the world, but nobody listened to us…Listen now.”. His speech was accompanied by computer simulated videos of missiles (including one which is “invincible”), with one seemingly targeting Florida.

On his part, US President Donald Trump made public his intention to abandon the non-proliferation treaty signed by the two superpowers over 30 years ago. 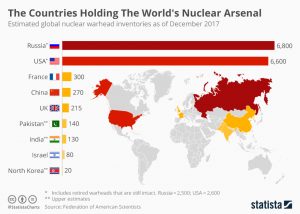