The Vietcong dug tens of thousands of miles of tunnels

The Vietnam War pitted North Vietnam against South Vietnam. While the South was fighting the North, they were also fighting another group, the Vietcong, who were a militant group from the South who sympathized with the North. Of course, multiple countries became involved in the war including the United States, China, the Soviet Union, etc., but of these external groups, the Vietcong were perhaps the most unique in their tactics.

The Vietcong, alongside the North, dug tens of thousands of miles of tunnels underneath Vietnam. The digging began in the 1940s, and the Vietcong joined the efforts in the early 1960s. A key city in what was formally South Vietnam, Saigon (now Ho Chi Minh City) was the site of hundreds of these tunnels. These tunnels are now known as the Cu Chi Tunnels. 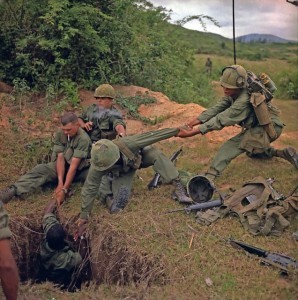 Saigon was the capital city of South Vietnam and the tunnels served as a means to move supplies, communications, troops, and equipment, while also providing the ability to perform sneak attacks. Not only were these tunnels small inside, they were also loaded with boobie traps. The South and their allies sought to combat these tunnels using tunnel rats and chemical agents but this was largely ineffective. The war fought in the tunnels was almost a whole other conflict in its own right.

When Were the Tunnels Made?

Vietnam’s tunnels were dug well before the war actually started. While the war began in 1955, the tunnels began being dug by Communist forces in the mid to late 1940s, with renovations occurring to tunnels already dug in the early 1960s. Tunnels were dug anywhere and everywhere in South Vietnam. Tunnels were typically carved without machinery, instead utilizing hand tools. 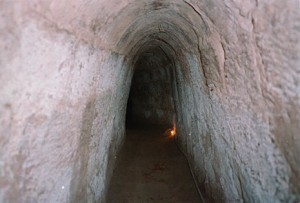 (Part of the Cu Chi Tunnel system. This particular portion has been expanded to allow tourists to visit it)

How Were the Tunnels Used?

The Cu Chi Tunnels played a major role in the Vietnam War. Not only did they play an important role in the Tet Offensive, a major North Vietnamese attack on South Vietnam, but also in the Fall of Saigon (which ended the war). The tunnels served as a hideaway, not just for the military but communities as well. In some tunnels, entire villages could be found hiding. This is particularly true for areas that saw a lot of bombings.

While the tunnels were used to house civilians as well as troops, they were also used to run supplies and communications. With such a large underground network, this could be accomplished fairly easy. 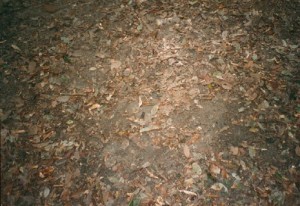 (There is a trap door here, but you would be hard pressed to locate it) 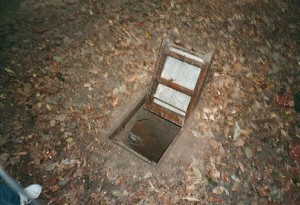 (Here is the same spot, but with the trap door open. These trap doors were incredibly difficult to spot, thus making them very dangerous)

In terms of military tactics, the tunnels saw a lot of use in the development of boobie traps. Commonly, traps used trip wires and explosives. These trip wires could activate many things, from a simple grenade falling, to stranger things like scorpions and dangerous snakes falling onto the soldiers who activated the wire.

Of course, the Vietcong utilized trap doors and other practices as well, such as sharp objects designed to pierce whoever was unfortunate enough to find themselves in a boobie trap. 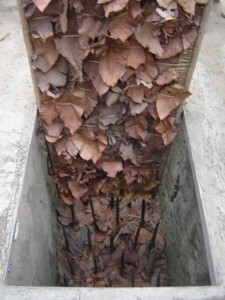 (A booby trap which utilized punji sticks. The wood/bamboo sticks can be seen at the bottom of the trap)

Punji sticks were used for this type of boobie trap. These types of traps usually are created using a hole in the ground which is then loaded up with very sharp bamboo or wood sticks, mostly pointed in an upright position. As someone’s leg lands in the pit, the wood will pierce their leg or whatever lands onto the punji sticks. 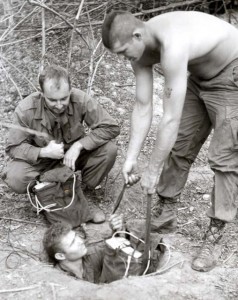 (Soldiers, and a tunnel rat preparing to detonate an explosion in the tunnel)

Boobie traps. Dangerous hideouts. Tunnel rats? South Vietnam and their allies looked to tunnel rats to combat the effectiveness of the Cu Chi Tunnels. At first, they started with chemical weapons. This just blatantly didn’t work. They then turned to tunnel rats.

Tunnels rats could be any man who was sent in on a lone mission into one of the Cu Chi Tunnels. They typically would go in with a .45 caliber pistol, and some explosives. Seeing as the tunnels were fairly narrow and short, tunnel rats tended to be smaller men who would spend countless hours in the tunnels searching for boobie traps and enemy forces.

Tunnel rats would have no idea what they were walking into. Given the fact that some of these tunnels basically contained underground villages, one man could come face to face with many enemy combatants. Once inside the tunnel network, the men were to search and destroy who or whatever they found. Tunnel rats were largely ineffective as well.

The South and their Allies also tried out the use of German Shepards, but the Communist forces then began using American soap which helped make them smell more familiar, thus hampering the dogs’ abilities to sniff them out.

While there was no huge battle fought in these tunnels, they did serve their own war purpose. Between all of the fighting going on between tunnel rats and enemy forces in the tunnels, the tunnels were also used as a base of operations to perform attacks. One such attack was the Tet Offensive, which was a large scale attack carried out by the Communist forces in 1968 on Saigon.