“We have long waited to come to Greece looking for the right location.

The first “Four Seasons” in Greece has been in operation since late March and its reservations for the coming summer, the works at the emblematic Asteras Vouliagmeni is going faster than expected and has already entered the new era, having already completed its first phase of the investment in the two hotels, totaling €140 million.

The total investment, which includes the upgrade of the marina, the 13th luxury homes and the upgrading of the beach is expected to exceed, along with the cost of acquiring the land, the 650 million mark, from the Turkish-Arabic investor scheme of Jermyn Street, with the contribution of AGC Equity Partners from London, and their participation investment funds from Abu Dhabi and Kuwait, Arab capitals and the Turkish Dogus Group. The first houses have already been built, while for the marina, the upgrading works with the upgrade as well as the Astir Beach projects. 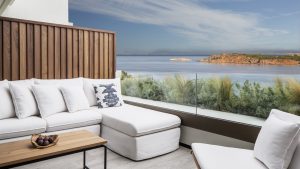 “With the completion of the first phase of the investment for the hotel piece (at the two hotel units, Arion and Nafsika), the word that is appropriate is awe, immense respect for a hotel that has played a leading role and has written its own story for over 50 years. Our vision is for Asteras to be a world destination in the area luxury tourism”, the manager of Astir Palace Vouliagmenis Mr. Stelios Koutsivitis stated. According to him, the footprint
of the investment is multiple, as it places the country on its world map of luxury tourism, while the image of Greece in the investment market will be upgraded.

Concerning the environmental “footprint” of the investment, he added “it ensures the sustainable growth of the peninsula, with best practices in the field of the environment and the protection of the cultural heritage with the Memorandum of Understanding that we have signed with the Ministry of Culture and the Ephorate of Antiquities”. 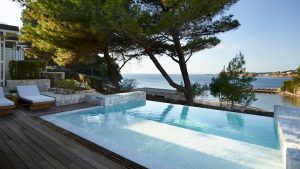 As for the next “wave” of investment in the marina and Asteras Beach, the plan has a budget of around €30 million. The Marina, the beach and the surrounding area and residences are estimated to be completed in two years.

Since March 29, the Four Seasons has begun a “soft opening” with 130 of the total of 303 rooms and bungalows, which are now 100% fully booked. The hotel complex includes three private beaches and three swimming pools, a thalassotherapy center, seven restaurants and more.

Visitors and reservations are largely from America (due to the name Four Seasons), but also from the “traditional” European market, the Arab countries, etc.

“We believe that there is currently a huge prospect for Greece and especially Athens. Asteras that is just 20 minutes from downtown Athens, will be a great development asset of the Athenian Riviera, which we want to see thrive in the Mediterranean”, Mr. Koutsivitis said.

About the Four Seasons

Four Seasons plans to open nine new hotel units some of which will include a residential area, given the increasing importance of the branded housing portfolio for the group. “We have long waited to come to Greece looking for the right location. The DNA of the company is rather simple as is the whole philosophy: We operate medium size hotels on best places in the world and Asteras meets these criteria”, its director Mr. Sam Ioannidis said. 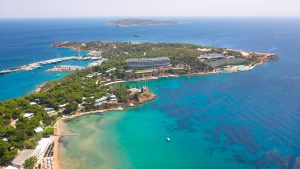 Internationally at present, the group has 111 hotels and resorts in 47 countries around the world including the latest additions to the Seychelles, Malaysia and Sao Brazilian Paolo. Greece, Thailand, India, Mexico, Canada, USA and India are the countries where a new chain of hotels will open in 2019.

Future plans for new hotels and residences of the group include China, Saudi Arabia and Vietnam. The group currently manages 41 residential projects in 19 countries with a portfolio of more than 3.000 units internationally with a real estate value of over $10 billion. Within the next five years, the Four Seasons housing portfolio is expected to double by more than 80%.