There are mountains, mountains and more mountains. And peaks, slopes, gorges and cliffs, not to mention the rapids, rivers, streams, waterfalls, lakes and forests. In Evrytania the absolute master was, is, and will always be the physical landscape. That’s why people visit this area in the Central Greece region – for its breathtaking trails, unique hiking routes and the unforgettably magnificent landscape.

Karpenisi, the principal town in Evrytania, is not famed for its beauty. Beneath the endless tiled roofs visible from above among the trees lies a concrete jungle. However, the town is famous for its nightlife and, above all, the nature that surrounds it: at the feet of the imposing Mount Velouchi, with its walking and hiking trails, ski center and a lesser-known alpine lake which is accessible only in the summer. 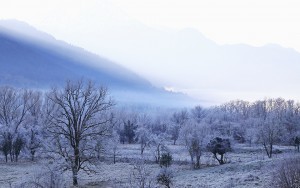 In the vicinity of Karpenisi lies the famous village of Kefalovryso, which is adorned with numerous natural water springs and a beautiful, imposing plane tree. But a classic route is the one that leads to Prousos, which traverses the former municipality of Potamia: this 30k road runs along the Karpenisiotis river that flows between the Helidona and Kaliakouda mountains.

Exploring the Beauty of Potamia

A handful of villages hang from the slopes of the two mountains sandwiching the Karpenisiotis. The nicest villages are Koryschades, Megalo Horio and Palio Mikro Horio. The first was included in the Greek Tourism Agency’s 1975 development plan and was restored based on the ideas of architect Aris Konstantinidis. 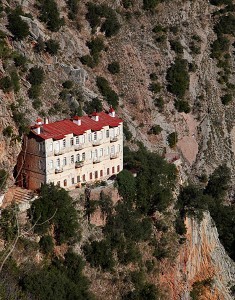 The stone facades were carefully maintained and the first hostel in Potamia was created, paving the way for the development of the area as a tourism destination. Among the buildings are the old village school, which today houses the Museum of National Resistance, with photographs by the great photographer Spyros Meletzis and newspaper clippings which remind visitors that this is where the Political Committee of National Liberation, known as the “Mountain Government”, held its first meeting in 1944.

Megalo Horio, on the other hand, has been beautifully maintained thanks to the help of its expatriate natives. Today it is one of the most touristic villages, with two beautiful paths (in Kefalovriso and towards Gavros) and a folklore museum. 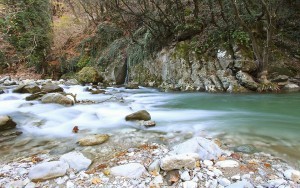 Across the river are the villages of Palio Mikro Horio and Neo Mikro Horio, meaning Old and New Little Village, respectively. Neo Mikro Horio was established in 1963 after a landslide that killed 13 people. The older village is still nice for a visit. A small lake sits at the entrance while the view at church of Aghios Sostis is unsurpassed. It’s worth stopping by at the remaining villages to see the old stone bridges, chat in cafes and enjoy some good food. The region is renowned for its sausages, pies, trout, rotisserie pork, game and all kinds of meat in general, which can be accompanied with very good local wine or tsipouro. 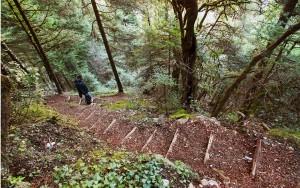 From here the route really takes off. The road meanders under the gaze of the mountains looming above the river in the morning mist, sometimes dipping into Kleidi gorge, where you will pass beneath a rocky overhang so impressive that you unconsciously bow. Further on, the valley widens, where the Karpenisiotis meets the Krikellopotamos to form the Trikeriotis river.

Prousos monastery, a site of Marian pilgrimage, is located in the magnificent landscape of the gorge. Thousands of worshippers flock all-year-round by bus to venerate the miraculous icon, which is considered to have traveled here by itself from Bursa in Asia Minor. On the way, you will see the spot where tributes are left, from where it is alleged the image passed and left its prints on the rock. It’s also worth coming here to visit Stremmenos delicatessen, which makes excellent prosciutto. 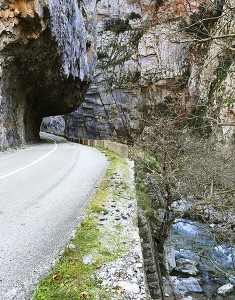 It’s around this point here that most visitors turn around and head back to Karpenisi. For others, though, this is the best part: the 20-minute route to Mavri Spilia gorge and its waterfalls outside Prousos or the gravel paths around Roska, from where the sensational Pantavrechi gorge begins. But if you leave behind the villages (if the roads are snow-free), you will understand the attraction of Evrytania even better as its unimaginable landscapes spread out before you.

Driving aside, taking a walk here is well worth it. The hikes are a real experiences because of the exceptional natural landscape, be they walks through the famous Pantavrechi in the summer or the streets of the villages, or a ramble along the Karpenisioti, though a little caution is necessary especially in the winter months. The nicest trails are in Tornos, whose people are very enthusiastic ambassadors for their lands. Good signage, expert maps and an incredible scenery await you. 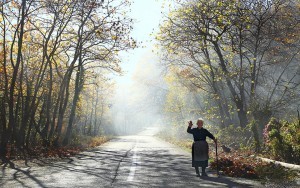 Imposing mountains towering above, lush forests all around, water running from everywhere … this is how legends are made, and in Evrytania you will find plenty!