It was one of the most remarkable fortresses of the Peloponnese during the Frankish and Ottoman periods. It was built in the middle of the 13th century (probably in 1245) by the famous French knight Geoffrey de Bruyeres or de Briel, baron of Karytaina.

De Bruyeres, born in Greece, is one of the leading figures in the Chronicle of Morea. He inherited Karytaina from his father Hugo who in the division of the Peloponnese between the Frankish Crusaders, in 1209, took one of the 12 baronies of the Principality of Achaia. The barony of Karytaina had 22 manors.

Before the Frankish occupation, there are no reports of Karytaina. However, there are serious indications that in the place pre-existed a Byzantine and perhaps an ancient castle (ancient Brenthi). 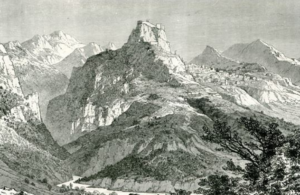 Geoffrey died childless in 1275. The barony then passed half to the prince of Achaia and the other half to his widow, Isabella Delaros (de la Roche). Isabella Delaros (sister of the Duke of Athens) married the Count of Lecce Hughes de Brienne (or Ugo di Brienne), who was of French descent from Campania, the eldest son of the late Frankish king, King of Cyprus, who had unsuccessfully attempted to take the throne of Jerusalem. Isabella Delaros died in 1279. Her husband took part in military operations in Italy, apparently not interested in Karytaina. 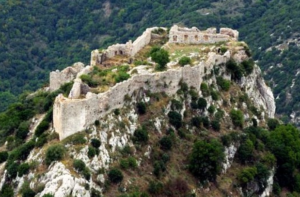 In 1289 an alleged relative of the De Bruyeres appeared and claimed the barony. This fact, combined with the absence of Hugo de Brienne and in order to settle the situation regarding the succession to the Principality of Achaia, prompted the king of Sicily to cede, in July 1289, the entire barony of Karytaina to daughter of the Prince of Achaia Isabella Villehardouin, known as Izambo, as a dowry for her marriage to Florent d’Hainaut, who became the new Prince of Achaia. 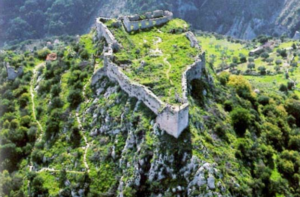 But Hugo de Brienne was an important figure and was not easy to ignore. He took Pontikokastro in return, while it is said, without being absolutely certain, that he finally took half of the Karytaina area again. In 1324, the guard of the castle was bribed by the Byzantine Commissioner of Morea Andronikos Asan Paleologos (“Asanis”) and Karytaina was occupied by the Byzantines. Andronikos was the nephew of the emperor Andronikos II Palaiologos and lord of Mystras between 1316 and 1322 and was the one who recaptured much of the Peloponnese from the Franks. In 1318 he had acquired in a similar way the castle of Akova which he bought from the Catalans. 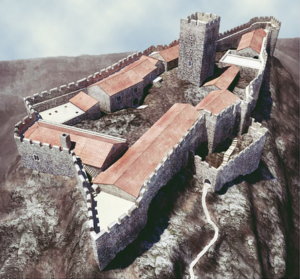 In 1458 or 1460, the castle was occupied by the Turks without resistance. Karytaina continued to be a great castle during the years of Ottoman rule, as it was the center of Kiza (administrative district).

For a short time, during the Second Venetian Occupation in the Peloponnese, between 1687 and 1715, the castle was owned by the Venetians.

In 1821 it was one of the first castles to be liberated and after the first victory of the Greek Revolutionaries, under Theodoros Kolokotronis, in the battle of Karytaina (March 27, 1821). In 1826 the Kolokotronis (a.k.a the Elder of Moria) would fortify the castle again, to be used as a base during his operations against Ibrahim and as a refuge for the civilian population. At the roots of the castle, near Panagia, he built his house. Ibrahim tried to occupy the castle, but without success.