Homosexuality is punishable by death in at least ten countries

On Friday, June 28th it was the 50th anniversary of the Stonewall Riots and LGBTQ people across the world are gearing up for a weekend of celebrations to remember the event that kickstarted the gay rights revolution. A lot has been achieved over the past half a century in the United States, though there is still more work to do.

The same cannot be said of other countries, many of which are waiting for their own Stonewall moment. In 2019, homosexuality is still punishable by death in at least ten countries and it remains illegal in countless others. Brunei recently provoked international outrage when it introduced strict Islamic laws in April that made homosexual activity punishable by stoning to death. The following infographic was made with EQUALDEX data and it shows where homosexuality remains illegal. 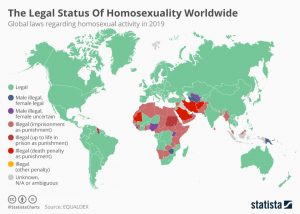