The World Intellectual Property Organization (WIPO) has released its 2019 Global Innovation Index. It evaluated innovation levels across 126 economies focusing on a long list of criteria such as business sophistication and levels of creative output. The 2019 index has found that innovation is still blossoming despite the global economic slowdown, especially in Asia. This can be seen by India which jumped five places in the rankings since 2018 and rose the most out of any country in 2018. It is now the world’s 52nd most innovative nation in the index. Last year, China broke into the top-20 for the first time, coming 17th. This year, it improved even more, moving up to 14th.

Switzerland topped the rankings this year with a score of 67.24 out of 100, the ninth time it has been named the world leader in innovation. Sweden comes second while the United States rounds off the top three. WIPO Director General Francis Curry said that “the rise in the GII by economic powerhouses like China and India has transformed the geography of innovation, and this reflects deliberate policy action to promote innovation”. In some parts of the world, high levels of innovation are simply impossible due to political instability or conflict. The lowest ranked countries in 2019 were Niger, Burundi and Yemen. 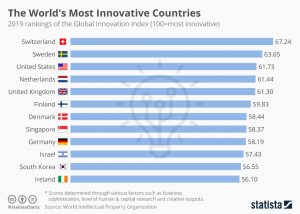