A little more than 10 years ago, in October 2008, Spotify launched its music streaming service in parts of Europe, marking the birth hour of what is now the most popular way of consuming music.

As the following chart illustrates, the music landscape looked radically different in 2008 compared to today. Back then, physical formats, predominantly CDs, accounted for 70 per cent of global music revenues, streaming was still in its infancy and even digital downloads had yet to reach their prime.

According to IFPI, streaming accounted for nearly half of global music revenues last year (and even more in the U.S.), making it the biggest source of income for the music industry by a significant margin. As market leaders Spotify and Apple Music continue to grow, it is all but certain that streaming will dominate music consumption going forward, especially considering that many of today’s and most of tomorrow’s listeners have grown up without a CD player and probably consider an iPod a relic from a long-forgotten time. 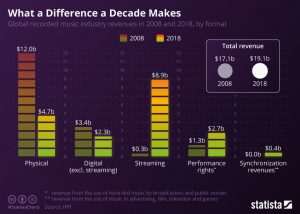