The Nebra sky disk is made from bronze; it weighs about five pounds and is approximately 12 inches in diameter, with a bluish-green coating and ornaments of gold symbols. The symbols have been tentatively interpreted as a lunar crescent, a sun or full moon, and stars. One theory is that it could also represent a cluster of stars we now know as the constellation Pleiades. Two additions to the original were added at a later date. One was a golden curve on each side, indicating the angle between each solstice of the year; another was a curvature at the bottom, marked with multiple strokes. The meaning of the markings is uncertain, but there have been several interpretations of what they might describe, including the Milky Way, a rainbow, or a solar barge with many oars.

The disk was dated, along with other artifacts, to approximately 1600 BC, after the discovery at a site near Nebra, Saxony-Anhalt, in Germany. It has been linked with the Unetice culture of the Bronze Age. In the beginning, the disk was suspected of being a forgery because it wasn’t like any known artistic item from the period. But after extensive study, it is now widely accepted as being authentic. 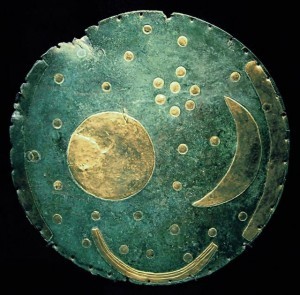 (Nebra Sky Disk- 3,600 year-old complex astronomical clock is one of the most important archaeological finds of the 20th Century)

(The swords found with the disk)

The story of the disk’s discovery is a rather strange one. In 1999, along with the disk Henry Westphal and Mario Renner discovered a chisel, two hatchets, fragments of spiral bracelets, and two bronze swords while they were treasure hunting with a metal detector. In Germany, archaeological artifacts are the property of the state in which they are discovered. The treasure-hunters were conducting their hunt without a license and were aware that their action constituted robbery and was illegal. Being a bit careless in their endeavor, they damaged the disk with their shovel and demolished parts of the site. The day after they gathered the artifacts, Westphal and Renner sold the entire cache for 31,000 DM to a dealer in Cologne. 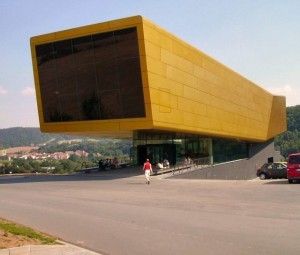 The objects changed hands within the country over the next couple of years, being sold at one point for an estimated one million DM. By 2001, the existence of the discovery became public knowledge. In February 2002, during a sting operation led by the state police, the Saxony-Anhalt state archaeologist Harald Meller secured the disk in Basel from a couple who had put it up for sale for 700,000 DM. Information gathered during their trial eventually led back to the original finders. They agreed to lead the police and archaeologists to the discovery site after receiving a plea bargain for a reduced sentence.

Archaeologists opened an excavation site and discovered evidence that reinforced the robbers’ claims. There were remnants of bronze artifacts in the ground, and the soil samples at the dig matched the soil found attached to the objects. The disk and the artifacts discovered with it are now displayed at the State Museum of Prehistory in the city of Halle in Saxony-Anhalt, Germany.

The discovery site is an ancient compound in the Ziegelroda Forest known as Mittelberg (central hill); it surrounds the top of a hill at an elevation of 827 feet, approximately 37 miles west of Leipzig. The surrounding area is acknowledged as having been settled during the Neolithic era, and there are about a thousand of these hills, or barrows, in the Ziegelroda Forest. The treasure-hunters claimed the artifacts were unearthed within a hollow inside a bank-and-trench dike-style enclosure. 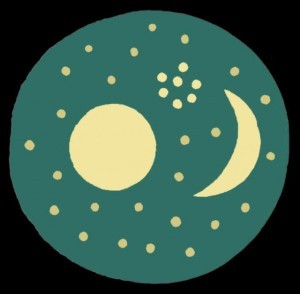 (1. On the left the full moon, on the right the waxing moon, and between and above, the Pleiades) 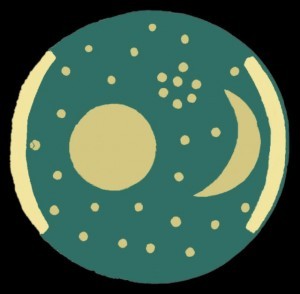 (2. Arcs were added on the horizon for the zones of the rising and setting sun; individual stars were shifted and/or covered)

The precise dating of the Nebra sky disk is greatly dependent upon the dating of the other Bronze Age weapons that were put up for sale the same time as the disk and said to be from the same site. These swords and axes can be typologically dated by category to the mid-2nd millennium BC. Radiocarbon dating of a particle of birch bark found on one of the swords has put the date at between 1600 BC and 1560 BC, which substantiates the estimated date for the swords and axes.

The date range corresponds to the time of the artifacts’ burial at the site, at which time the Nebra sky disk had likely already existed for several generations. 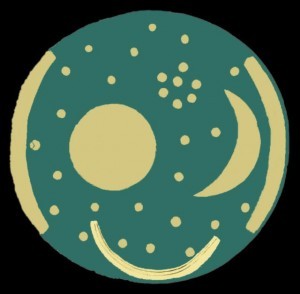 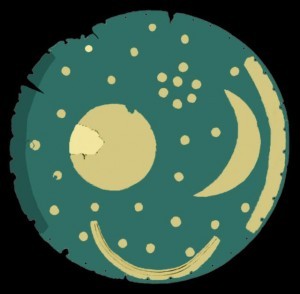 (4. Diagram of the disk in its current condition, a star and a part of the sun—or full moon—have been restored)

According to a preliminary analysis of trace elements of the Nebra sky disk, the copper originated at Bischofshofen, Austria, while the gold was believed to be from the Carpathian Mountains. However, an analysis conducted more recently discovered that the gold used was from the United Kingdom – from the river Carnon in Cornwall. The tin content of the bronze in the disk was also from Cornwall.

The Nebra sky disk showcases the oldest tangible portrayal of our galaxy in the world. It was included in UNESCO’s “Memory of the World Register” in June 2013 and designated as one of the most significant archaeological discoveries of the 20th century.