The Hellenic Police officials that investigated the case of the murder of the American biologist Suzanne Eaton gave a press conference in order to inform the public both in Greece and the USA of how the case was solved and the perpetrator was arrested.

We invited you here today to present to you the undertaken actions by the Hellenic Police to solve the homicide of the 60years old U.S. citizen, found dead on the 8th of July 2019 at a rural area of Platania Municipality.

As you have already been informed, yesterday was brought to the Sub-Division of Security in Chania a 27years old native to be examined as the main suspect for the homicide; he admitted his guilt and today he will be brought to justice.

As you may know, the 60years old female was a renowned scientist in the field of biology – entomology. She arrived at Chania on the 30th June in order to participate at a convention held at the Conference Center of the Orthodox Academy of Crete. 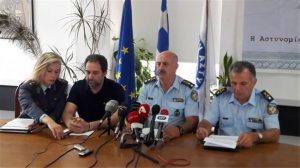 In the morning of the 4th of July 2019, the organizer of the conference reported her as a missing person to the Police Department of Platania in Chania, stating that she was last seen during lunch on the 2nd July at the premises of the Academy.

Immediately, extended investigations and search were conducted in the broader region, assisted by personnel and means from the local police Agencies, the Hellenic Police Air Service, the Special Unit for Disasters of the Hellenic Fire Brigade (E.M.A.K.), the Hellenic Coast-Guard, the Army and the General Secretariat for Civil Protection.

Voluntary organizations and citizens contributed, while in parallel the national coordinating program that mobilizes volunteers in cases of disappearances of elderly people “Silver Alert Hellas” was activated to publicize a photograph and information about the victim.

During the investigations, at the evening of the 8th of July, Officers of the Police Department of Platanias were informed by amateur cave explorers that in an abandoned World War II shelter, in a rural area close to Xamoudochori of Platania in Chania, they latter spotted a dead female body.

Officers of the Sub-Division of Security in Chania, a forensics team and medical examiners immediately arrived at the scene and initiated a methodological autopsy and search on the ground of the broader area.

At this phase, it occurred that the dead body belongs to the disappeared 60years old U.S. citizen, and brought signs of violent criminal act and possibly sexual abuse. 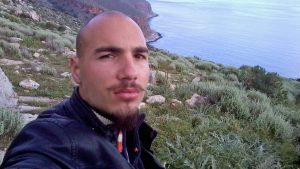 (The suspect has confest the crime)

The identification of tracks from vehicle’s wheels, that were leading to the shelter’s drain proved an evidence of critical importance that directed our investigation. This fact, in combination with the position of the body in the area, strongly supported the argument that the victim was transferred to this location.

We systematically proceeded in our investigation in order to solve the case. We conducted autopsies, collected information from CCTVs, interviewed witnesses and exploited in a coordinated manner all clues and evidences occurred during the development of the investigation.

Based on the analysis of the findings, we focused our investigation in the area, we shaped the perpetrator’s profile, and we identified a number of suspects and proceeded to targeted police custody for interviewing.

The careful examination of the collected evidence and information led us to narrow down the focus of the investigation to a single person, the 27years old suspect, resident of the area, who was brought for questioning yesterday Monday, the 15th of July 2019 to the premises of the Sub-Division of Security in Chania, competent authority to conduct the investigation in cooperation with the department of Fighting Organized Crime of Police General Directorate of Crete. 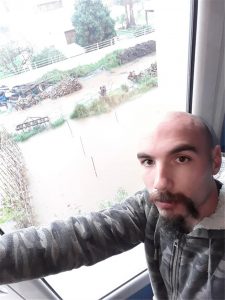 While questioned the 27years old provided too many conflicting answers and under the light of the collected evidence, he confessed his crime.

Also, I would like to thank Officers of the Special Unit for Disasters (E.M.A.K.), of the Hellenic Coast Guard, the Army, as well as the volunteers of the General Secretariat for Civil Protection and the rest organizations that participated in the efforts for finding the 60years old victim.

More information for the case will be provided by the Head of the Press Office of the Police General Directorate of Crete, Police Major, Mrs Eleni Papathanasiou.” 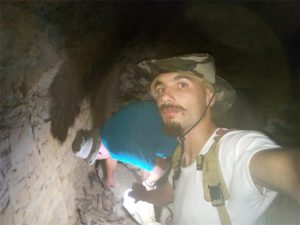 As previously mentioned by Major General, following a systematic led by the Sub-Division of Security in Chania we managed to solve the homicide of the 60years old US citizen.

Regarding the case itself, the victim arrived from Germany to the Conference Center of the Orthodox Academy of Crete at Kolimvari of the Platania Municpality, in the afternoon of 30th of June 2019 in order to participate to an international scientific conference, taking place from 1st to 5th of July 2019, while she resided to the hospice rooms of the Academy.

It was her 4th visit to Crete, participating in similar conferences, while on the 4th of July 2019 she was expected to present to her colleagues at the conference the findings of her research. At noon on the 2nd of July 2019, right after lunch, she returned to her room, wore a sports outfit and went out for her daily walk, leaving behind her cell phone and other personal items.

Once the victim’s disappearance reported and after finding her body, we immediately launched a thorough investigation in a methodological manner that resulted to the arrest of the 27years old perpetrator.

Concerning the timings of the case, from the necropsy that took place occurred that her death took place at the noon of the 2nd of July 2019, while forensic evidence showed suffocation as a cause of death. Further forensic examination presented that the body had many broken ribs face bones and multiple injuries at both hands.

The perpetrator claimed that during the noon of the 2nd of July 2019 identified the victim walking towards the “Evelpidon” memorial and motivated by sexual satisfaction, he hit her twice with his car to stop her.

Following, according to his claims, being unconscious he put the victim in the trunk of his car and transfer her to a shelter’s ventilation drain, where after raping her, abandoned her there.

Then, he re-blocked the entrance of the drain with a wooden palette and moved to the nearby graveyard, where he carefully cleaned the trunk of his car from evidence and other forensic findings.

From all the identified scenes, blood samples and other findings were collected for forensic examination, while search within the investigation led to the car confiscation, as well as other evidence, namely clothes and a button that the perpetrator owned illegally.

Following the criminal proceedings, the perpetrator has been led to the District Prosecutor’s Office, while awaiting the results of the forensic, clinical and toxicological results of the examinations”.