The unloading of the OH-58D Kiowa Warrior armed reconnaissance helicopters begun on Wednesday in the port of Volos. 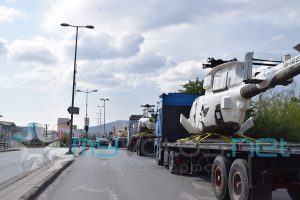 The Hellenic Army receives 70 helicopters at an the insignificant cost 44,15 million dollars, which can prove crucial for the rapid reaction and first attack of hostile force that will threaten the Aegean Sea islands. 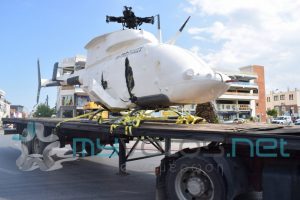 Along with the 70 OH-58Ds came the last so far of the 10 CH-47SD Chinook helicopters that the Hellenic Army bought from the US Army.

The cargo ship “Ocean Giant” sailed on April 25 from Port Georgetown arrived at 9 pm on Tuesday in the port of Volos. The unloading of the helicopters has begun and it will be completed on Sunday. Six of them came ready to fly. These six flew directly to Stefanovikio Army Aviation Base. In the cockpits there were a US pilot and a Greek co-pilot. 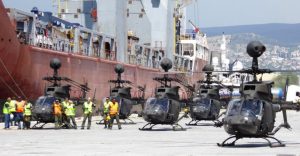 As a first step, 36 helicopters are capable of taking up every mission as they came complete in terms of communications, carrying three different types of secure radio stations. 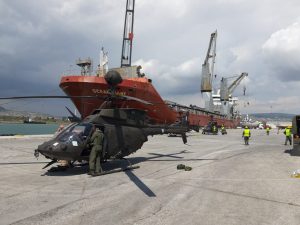 This does not mean that the remaining 24 carrying only two types of secure radio stations can not carry out a war mission. It’s just that their crew will operate with some minimal restrictions.