According to the World Drug Report 2019, global illicit cocaine production reached a record high in 2019. The research was released by UNODC, the United Nations Office on Drugs and Crime, and it found that the severity and complexity of the drug situation worldwide is increasing. Some 271 million people aged between 15 and 64 across the world are thought to have used drugs in the past year, 5.5 percent of the global population.

In 2017, global cocaine production increased 25 percent, hitting an all-time high of 1,976 tons. Despite efforts to curb coca cultivation, cocaine production is continuing to thrive in post-conflict Colombia. New remote fields and the influence of criminal gangs are contributing to the problem and manufacture of the drug more than quadrupled between 2013 and 2017. The problem isn’t just limited to Colombia with Bolivia and Peru also seeing increases.

The authorities are making progress, however, and the global quantity of the drug seized increased by 13 percent to 1,275 tons in 2017, the largest quantity ever reported. That means that the amount available for consumption is increasing at a slower rate than the manufacture. Consumption globally remains high and an estimated 18.1 million people were past-year users of cocaine in 2017. 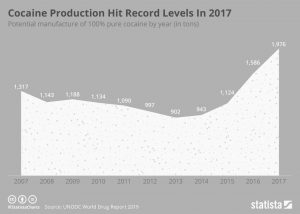