Prince Charles & William also learned of their decision from TV

Harry and Meghan last night ‘pressed the nuclear button’ on their royal careers by announcing they are quitting their frontline roles.

Their dramatic decision was taken without the knowledge of the Queen, Prince Charles or Prince William, who learnt about the announcement as it broke on television news channels.

The couple, who plan to split their time between Britain and North America, made the bombshell announcement just days after returning from a six-week break in Canada.

A senior royal source said the Queen and her family were ‘deeply disappointed’. Another said the royals were ‘shocked, saddened and downright furious’ at the couple. 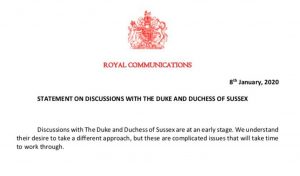 In a terse statement, Buckingham Palace said: ‘Discussions with the Duke and Duchess of Sussex are at an early stage. We understand their desire to take a different approach, but these are complicated issues that will take time to work though.’

Well-placed sources made clear that the shock announcement was a personal statement and ‘members of the family were not consulted on the contents’.

Another royal source said: ‘It’s deeply unfair to the Queen who doesn’t deserve to be treated this way. It is a shoddy way to treat her. The family understands that they want to do something different and is perfectly willing to help them. People are just devastated.’

The Mail has been told the couple ‘secretly plotted’ their decision during their stay in Canada, even conspiring to create a new website independent of the Royal Family and ready to launch it when they returned. This was without the knowledge of their own loyal UK-based press team.

‘The level of deceit has been staggering and everyone from the top of the royal household to the bottom feels like they have been stabbed in the back,’ one source said.