All but one are in the US

Many universities have forged their reputations on the achievements of their students, whether that means Nobel laureates, Pulitzer Prize winners or Olympic athletes. Despite the prestige such accomplishments certainly bring to an institution, the number of super rich alumni is another good way of gauging a university’s academic prowess and reputation. Wealth-X looked into that topic and released its University Ultra High Net Worth Alumni Rankings that compared the number of wealthy alumni from different universities around the world.

Out of the top-10 universities with the highest number of UHNW alumni (ultra high net worth individual means someone with a net worth of at least $30 million), nine are American. The exception on the list is the University of Cambridge in the which comes seventh with an estimated 2,760 super rich alumni who have a collective net worth of $390 billion. Even though those numbers sound impressive, they are dwarfed by Harvard University. It boasts an estimated 13,650 UHNWs who have amassed a collective fortune of $4.8 trillion.

Harvard is in a league of its own and its population is more than double Stanford University and the University of Pennsylvania in second and third with around 5,580 super rich alumni each. Wealth-X’s report mentions that the vast majority of the wealthy alumni from U.S. universities are actually self-made. For example, 79 percent of wealthy alumni from Harvard are self-made, 15 percent have mixed sources for their fortunes and only 6 percent inherited it. 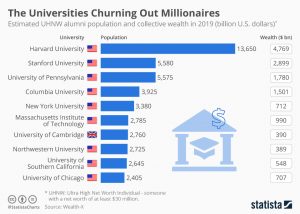