The startups represent diverse fields and sectors that include education, medical technologies etc

Thirteen startups representing the best of the best in the Greek ecosystem have been selected and are taking part in the iconic technology, innovation and entrepreneurship festival “South by Southwest” (SXSW®) from March 8-17, 2019, in Austin, Texas with the support of the Ministry of Digital Policy, Telecommunications and Media, The Hellenic Initiative and the U.S. Embassy in Athens, in collaboration with the American-Hellenic Chamber of Commerce and the Industry Disruptors-Game Changers.
During this year’s SXSW® festival, the Greek startups – most of whom have already raised seed and series of funding – will have the opportunity to showcase their products and services on an international stage at one of the most cutting-edge technology and entrepreneurship events in the world. In previous years at the festival, companies such as Twitter and Periscope have been introduced to the investment community, going on to become giants of the global tech industry.
Following up to the strong engagement between the U.S. and Greek companies and startups present at the Thessaloniki International Fair in September 2018, the Ministry of Digital Policy, Telecommunications and Media, along with the Industry Disruptors-Game Changers who organized the “Digital Greece” Pavilion joined their efforts with the US Embassy and THI to organize for the first time ever an official national delegation at the SXSW Trade Expo, where more than 100,000 entrepreneurs, investors and top industry executives are expected to gather.
The Greek Delegation to SXSW® 2019 underscores the belief shared by all partners that entrepreneurship is a key element in building a new generation of creative and innovative business projects that can contribute to Greece’s future prosperity. Through their attendance to one of the most exclusive entrepreneurship conferences in the world, Greek startups will have the opportunity to be inspired and grow.
The thirteen startups which represent diverse fields and sectors that include education, medical technologies, communications, robotics, creative industries, tourism and others, are:
The Tipping Point, Loceye, Vertitech, Orama VR, PD Neurotechnology, Tutobo Educational Robotics, Racecheck, Edit59, Social Experience, Sustainable Food Movement in Greece, Blendo, Viral – Loops, Spotlight POS – Spotfolio. **
Over the past five years, through the partnership between The Hellenic Initiative and the U.S. Embassy, almost 100 Greek startups have had the chance to participate in SXSW®. Though their participation, they had the opportunity to exhibit their business models and ideas on an international stage which includes some of the world’s most successful investors, representing over 100 countries. Additionally, they networked with a group of 35.000 panelists and entrepreneurs with a significant global presence. 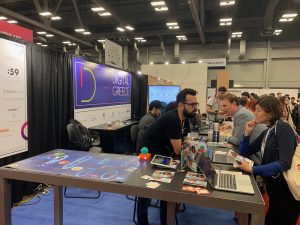 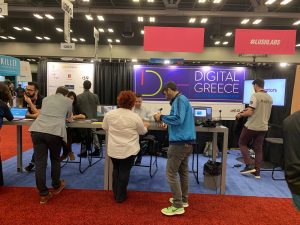