They are on display at a museum in Brighton

About 5,600 years ago, a 20-year-old woman was buried with a tiny baby resting on her chest, a sad clue that she likely died in childbirth during the Neolithic. This woman and six other ancient Europeans — including a Cro-Magnon man, a Neanderthal woman and a man-bun-sporting dude from 250 B.C. — are on display at a museum in Brighton, England, now that a forensic artist has re-created their faces.
These re-creations took hundreds of hours of work and are based on every available detail scientists could glean from these people’s remains, including radiocarbon dating; the collection of dental plaque; and, when possible, the analysis of ancient DNA that detailed each person’s eye, skin and hair color, said Richard Le Saux, senior keeper of collections at the Royal Pavilion & Museums in England, where the exhibit opened on Jan. 26.
This exhibit aims to shine a light on the past inhabitants of Brighton and mainland Europe by featuring hyper-realistic portrayals of their faces
To re-create these heads, Oscar Nilsson, a forensic artist based in Sweden, took 3D printed replicas of their skulls and got to work. After reviewing data on the individuals’ heritage and ages of death, he used plasticine clay to sculpt muscles and then covered that with artificial skin, which included details such as wrinkles and pores. The first two faces — those of a Neanderthal woman from Gibraltar and a Cro-Magnon man from France — show the history of Europe’s early human inhabitants. According to DNA research, “early Cro-Magnonslike this one had really dark skin,” Nilsson told Live Science in an email.
The woman who likely died in childbirth, known as the Whitehawk girl (named for Whitehawk, Brighton, where she was found), also had dark skin. While her remains didn’t have any preserved DNA, other burials from her time period did, and those people’s genetic material shows “their skin color to be at least like today’s people living in North Africa, or in fact, a bit darker,” Nilsson said. 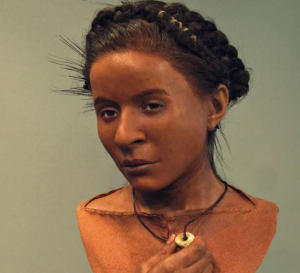 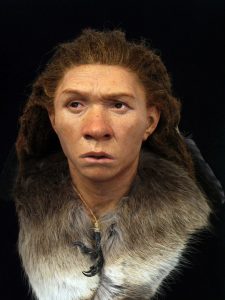