It will take 21 years for Greece to see unemployment getting back to the levels it was prior to the crisis.

Poul Thomsen presented a diagram during the presentation of Anders Åslund’s book.
The IMF official had similar but more optimistic estimates for Italy, Portugal and Spain. 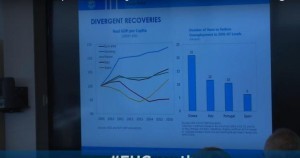 Thomsen’s estimates are part of the two reports on Greece’s economy and the viability of the Greek debt that will be discussed by the IMF’s Executive Board in the following days.

According to mr. Thomsen, the EU has made considerable progress in reforms as well as its architecture and the banking unification process and its protective wall.

He also urged for a accommodative monetary policy that will take advantage of the financial space that some countries have, integration of the Banking union some financial expenses in accordance with Juncker’s plan and, above all, structural reforms to convince Germany, as he said.