Three families, including young children, were involved in a series of ISIS-inspired bombings that hit the Indonesian city of Surabaya within just 24 hours, the country’s National Police said Monday.

The four attackers died, while an eight-year-old girl who was on one of the motorcycles was thrown clear and survived, police spokesman Frans Barung Mangera said.

It followed a suicide attack involving a family of six on three Christian churches Sunday morning, when a husband and wife used their children to detonate explosives, killing 12 people and injuring at least 40.

Later Sunday, in what police also described as a terror incident, a mother and her 17-year-old daughter were killed in the Surabaya suburb of Sidoarjo, when a bomb, handled by the family’s father detonated prematurely. Police found the father of the family in the house holding a detonator, and shot him, police spokesman Barung Mangera said.
The family’s 12-year-old son took his two younger sisters to the Bhayangkara Police hospital, he added.

Tito Karnavian, Indonesia’s top-ranking police officer, told reporters Monday that police were working on the assumption that the attacks followed a directive from ISIS Central Command to avenge the imprisonment of the former leaders of Jamaah Ansharut Daulah (JAD), an Indonesian jihadi group that supports ISIS.

Indonesia, the world’s most populous Muslim country, has struggled in recent months with a rise in Islamist militancy, which has come as ISIS has been squeezed out of its heartland in Syria and Iraq.

“These attacks are the nightmare scenario that’s been anticipated since Indonesians affiliated with ISIS have returned from the Middle East,” said Greg Barton, Chair in Global Islamic Politics at Deakin University in Australia. 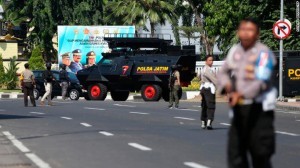 The series of attacks started Sunday morning when a family of six detonated bombs in three churches in Surabaya.

The father, identified by police as Dita Oepriarto, was said to have driven his wife Puji Kuswat and their two daughters, aged 9 and 12 to the Indonesian Christian Church. The trio went inside and detonated a bomb.

Oepriarto then drove the van to the Pentecostal Central Church, where, from inside the vehicle, he detonated another bomb, police said.

Around the same time the couple’s two teenage sons, aged 16 and 18, drove motorcycles to the Santa Maria Catholic Church, where they also detonated bombs. All members of the family died in the attacks. Through its Amaq News Agency, ISIS claimed responsibility for what it called “martyrdom attacks” on the churches.

Karnavian also told reporters Monday that none of the families involved in the attacks had recently traveled to Syria, but Oepriarto had close links with someone who had recently returned from Syria who may have inspired him to carry out the attacks.

Formed in 2015, the group linked to the attacks, Jamaah Ansharut Daulah (JAD), is a jihadi group that supports ISIS, according to Jakarta officials.

Its leader, Aman Abdurrahman, was scheduled to appear at a court hearing last week, but it was postponed after a deadly riot broke out at the jail where Aman is being held in Depok, West Java, according to a report in the Jakarta Post.

Police now believe the riot at the Mobile Brigade Detention Center was initiated by a convict acting on the ISIS Central Command’s instruction.

The militant group is part of a “second wave” of terrorist groups to be active in Indonesia, according to Hugo Brennan, senior Asia analyst at Verisk Maplecroft, a risk consultancy firm.

“The first wave was linked Al Qaeda from 2001 and were involved in the Bali attacks. Indonesian security forces dealt with them fairly effectively. 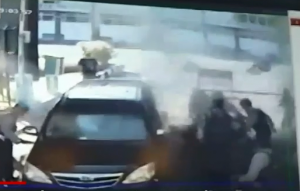 “Then in 2014 there was an uptick in violence as groups linked to ISIS became active, stoked by online propaganda, militants who traveled to the Middle East and fighting in the Philippines. The attacks yesterday are part of a pattern … but (are among) the more sophisticated, and as it involved children, heinous”.

Barton at Deakin University said the Surabaya attacks could be the “opening salvo of a new, more sophisticated campaign,” and added that the timing — just before Ramadan, which begins May 15 — “bears the hallmarks of ISIS,” which has used the holy month in the past to launch high profile attacks.

“This is the first Ramadan since ISIS-linked Indonesians have returned” from Syria, he said.

Indonesia has a long history with terrorist groups, particularly the al-Qaeda affiliated group Jemaah Islamiyah, which claimed responsibility for 11 attacks between 2000 and 2010, including the deadly 2002 Bali bombings that left more than 200 people dead and hundreds injured, many of them tourists.

According to Wawan Purwanto, the information and communication direct of Indonesia’s National Intelligence Agency, around 930 Indonesians have traveled to Syria and Iraq to fight alongside ISIS since 2013.

Of those, around 400 had returned to Indonesia while 100 are known to have died in battle. Exact numbers are uncertain because immigration officials in Iraq and Syria don’t have a record of them entering those countries, Wawan said.

The United Nations Secretary-General condemned the three terrorist attacks on the Surabaya churches. Through his spokesman, Stephane Dujarric, Secreatry General Antonio Guterres said that he was “appalled at reports that children were used to participate in the attacks,” and offered his condolences to the families of the victims.

“(The Secretary General) reiterates the support of the United Nations to the Government and people of Indonesia in their efforts to fight and prevent terrorism and violent extremism, including through the promotion of pluralism, moderation and tolerance,” the statement said.

More than 82% of Indonesia’s roughly 261 million people follow Islam. Almost 10% of the population is Christian.