Three people were injured after a large part of the cliff over the famous beach of Navagio (Shipwreck) in Zakynthos broke off.
According to sources, the three people sustained light injuries and have been transported to hospital. The landslide occurred at approximately 11.30 am overturning three boats.
A Zakynthos fire brigade unit has been dispatched on the scene to investigate whether other people have gone missing under the rocks and sand on the beach.

According to testimonies from boat owners present, three passenger boats were anchored when the rocks broke off. “There was a noise and a small piece of rock fell, then a second bigger and finally a third big piece of rock, creating a sea whirlpool that overturned the boats,” he told the Athens News Agency.

Hundreds of tourists with young children were on the beach during the landslide. They were all taken off the beach after the incident.
Special Fire Brigade search and rescue units from Elefsina have departed with a Super Puma helicopter from Elefsina to take part in the search. 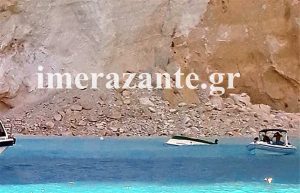 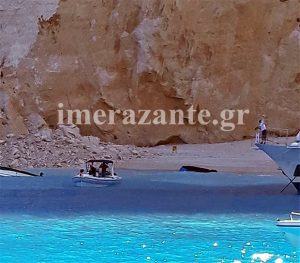 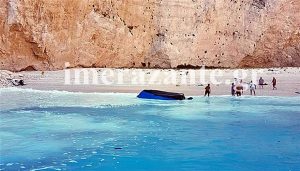