US Secretary of State Rex Tillerson and his Russian counterpart Sergei Lavrov began tense talks in Moscow on Wednesday as the two sides locked horns over an alleged Syrian chemical attack and subsequent missile strike by Washington.

Tillerson said he wanted “a very open, candid and frank exchange” as the two men try to figure each other out during the first visit to Russia by a senior member of US President Donald Trump’s administration. 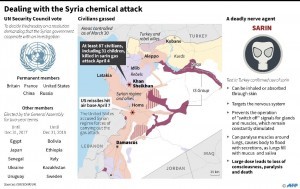 Lavrov said Moscow was hoping to understand Washington’s “real intentions” during the visit and warned that Moscow considered it “fundamentally important” to prevent more “unlawful” US strikes in Syria.

“Your visit is very timely,” Lavrov said, adding it offers an opportunity to clarify the chances of cooperation between the two sides “above all on the formation of a broad anti-terrorist front”.

Despite hopes of an improvement in Russia-US ties under Trump, the Tillerson-Lavrov talks look set to be dominated by the war of words over Syria — where more than 320,000 people have died in six years of war.

But with US officials suggesting Russian forces may have colluded in the latest atrocity blamed on President Bashar al-Assad’s regime, it is not clear whether Tillerson will be invited to meet President Vladimir Putin, with the Kremlin only saying there was a “probability” they could talk. 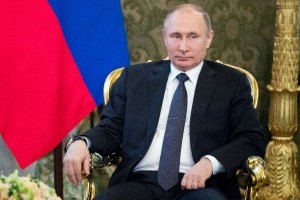 On the eve of the meeting, far from trying to calm tempers, both sides escalated their rhetoric.

Putin accused Assad’s opponents of planning to stage chemical attacks to be blamed on the Assad regime in order to lure the United States, which bombarded a Syrian air base last week, deeper into the conflict.

The Kremlin leader also again slammed the US missile strike and angrily rejected accusations that Assad’s forces were behind the suspected chemical attack last week on the town of Khan Sheikhun that left 87 civilians dead including children.

“Where is the proof that Syrian troops used chemical weapons? There isn’t any. But there was a violation of international law. That is an obvious fact,” Putin told Mir television.

Trump’s spokesman Sean Spicer said Tillerson would go into the meeting with Lavrov to “make sure we let Russia know that they need to live up to the obligations it has made” to halt Assad’s chemical weapons use.

A senior US official suggested that Russian forces must have had foreknowledge of the chemical attack.

And US Defence Secretary James Mattis said Washington has “no doubt” that Assad was behind the massacre.

He said the US cruise missile strike in response “demonstrates the United States will not passively stand by while Assad ignores international law and employs chemical weapons he declared destroyed”. 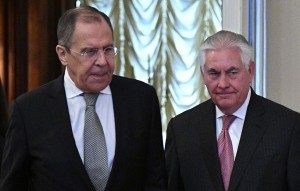 The UN Security Council is set to vote Wednesday on a resolution demanding the Syrian government cooperate with an investigation into the attack — a measure Russia will likely veto, diplomats said.

Assad foe Turkey said Tuesday that blood and urine samples taken from victims of the alleged attack confirmed that the banned sarin nerve agent was used.

Tillerson’s visit comes as hope in Moscow has dimmed that Trump will make good on his pledge to improve ties with Russia, as relations with the Kremlin have become politically toxic on the back of claims Putin conspired to get Trump elected.

The former oil executive might once have looked like the perfect envoy to mend strained ties, having worked closely with the Kremlin while negotiating deals for energy giant ExxonMobil.

But the underlying tensions in the relationship never went away and last week’s chemical attack infuriated Trump.

Earlier this week, British Foreign Secretary Boris Johnson cancelled a planned trip to Moscow, but Tillerson maintained his schedule, flying in late Tuesday after a G7 ministerial meeting in Italy.

“Russia has really aligned itself with the Assad regime, the Iranians, and Hezbollah,” Tillerson said before leaving Italy.

“Is that a long-term alliance that serves Russia’s interest?” he asked. “Or would Russia prefer to realign with the United States, with other Western countries and Middle East countries who are seeking to resolve the Syrian crisis?”