A former British soldier dubbed ‘Tim the Cannibal’ by his Kurdish comrades has revealed how he left his comfortable life in London to fight ISIS in their Syrian backyard.
Tim Wordsworth, a scaffolder from East London, estimated that he fired 1,000 rounds at ISIS while fighting with the People’s Protection Units of Syrian Kurdistan (YPG).
The married 39-year-old said he was inspired to take up arms against the murderous organisation because he was left with unfinished business from his Army days and in response to the slaughter of thousands of Yazidis by ISIS in August 2014.
He was nicknamed ‘Tim the Cannibal’ by his fellow fighters because he used to slurp up the blood of dead jihadists he delivered to mass graves.
Speaking exclusively to MailOnline, he described the fighting as being ‘like World War One’ and revealed the unimaginable horrors he witnessed, such as seeing dead ISIS fighters whose bodies were so badly mangled that their jaws were ‘above their skull’.
He also recounted staying in houses where the occupants had ‘probably been murdered brutally’, and finding starving cats and dogs roaming in villages recaptured from ISIS.
The fighter revealed how depraved ISIS fighters threw nitric acid in the face of pre-pubescent girls or threw them down a well if they refused to have sex with them.
He said: ‘The actual reality of war, of horrific injuries and total terror of death was the f****** worst experience of my life but there’s also this wolfpack thing, especially with the Kurds, that you get drawn into and in the end I got drawn into it. I was blessed to survive.’
Tim said he became an ‘adopted orphan’ of the Kurds and became famous among them, which he likened to the fanfare surrounding pop star Justin Bieber.
After fighting with the YPG for half a year he spent one month on the frontline with the peshmerga, the government-backed army of Iraqi Kurdistan, fighting ISIS in Iraq.
However he was imprisoned for three-and-a-half months after insulting the Kurdish president Masoud Barzani in a Facebook rant which he said he later regretted and admitted was ‘stupid’. 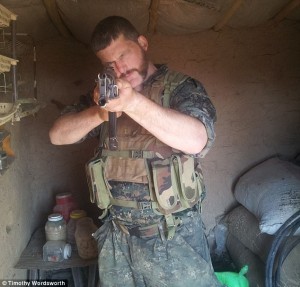 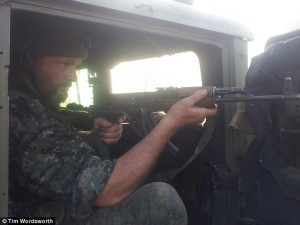 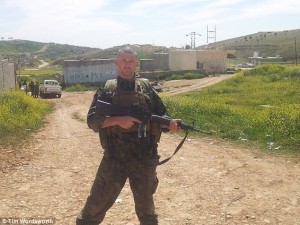 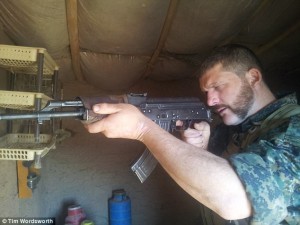 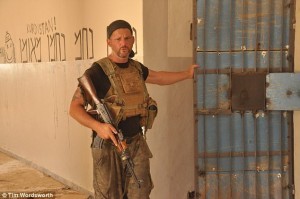 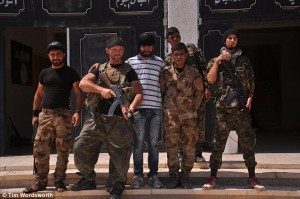