The Greek table for the New Year celebrations is made of dishes shaped by regional traditions and customs coming from all over Greece. In fact, there’s no other celebration in the Greek calendar carrying such a deep symbolism, since it’s associated with luck, prosperity, welfare, and happiness, as it is the first day of the year.

It’s the Greeks’ wish that all the supplies and ingredients for the New Year’s table come from their own land. Flour will be mainly used to bake pastries and cook traditional desserts; such as fried delicacies in northern Greece, or fried lalaggia in Mani. 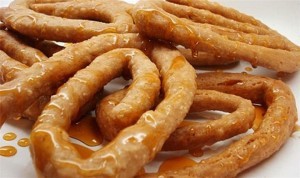 Richness will be expressed on the table by means of wheat, wine, honey, chestnuts, oranges, and dried fruit. There will be an abundant use of winter vegetables, such as cauliflower or cabbage, to enrich the festive table even more.

As a main dish, pork remains the choice of families, as suggested by the tradition. The custom of the gourd spread all over Greece meant slaughtering a domestic pig on Christmas Eve, thus assuring a rich provision of meat during the season holidays, as well as for important celebrations during the rest of the year, since most of that meat was prepared in recipes intended to preserve it for long months.

The recipes included sausages, but also techniques such as curing, smoking, and even using gelatin, fat, etc to preserve the meat. 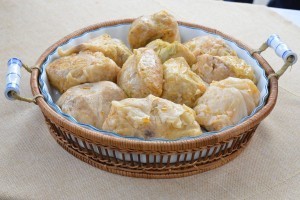 The New Year’s Eve table also welcomes yiaprakia, especially in northern Greece. Some sources agree to state that this dish has clear Byzantine roots, while others state that the cabbage leaves of these stuffed rolls represent the clothes of Christ.

Other important elements at the New Year’s Eve table include, Christopsomo, Vasilopita and the traditional sweets melomakarona and kourabiedes that the Greeks started tasting before Christmas. 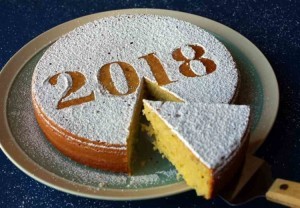 While modern tradition relates the Vasilopita to Saint Basil, this pie has much older roots that go as far back as Ancient Greece.

Vasilopita is a pie that the Greek ancestors would prepare using fresh wheat, and it was intended to honour Demeter; the goddess of agriculture.

The tradition says that they would also dedicate a loaf of bread that was specially cooked for Apollo, as well.