Fundraising totals for 2020 candidates show the advantage of being an incumbent president – and the challenge for Democrats, who are raising less money and still have to compete among themselves before taking on Donald Trump.

The Trump campaign and joint fundraising committees ended the first quarter with $48.9 million in the bank, more than three times as much as any of the potential challengers in a crowded Democratic field, according to disclosures filed with the U.S. Federal Election Commission Monday.

The first-quarter filings offer early evidence of who’s generating buzz among Democratic grassroots donors as the party distances itself from big money and instead woos those who give in small amounts online. Bernie Sanders led all Democratic contenders in fundraising, fueled by small-dollar donors, while New Jersey Senator Cory Booker and his colleague from New York, Kirsten Gillibrand, struggled to raise a significant share of their money that way.

Democrats face a series of expensive nominating contests early next year, while Trump — whose approval ratings are well below 50 percent — has the luxury of focusing on building a war chest for the general election — still more than 18 months away. 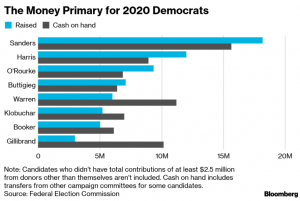 Sanders, who leads with $18.2 million raised and has $15.7 million in cash on hand, started with a massive fundraising advantage because of the list of supporters he’s maintained from his failed 2016 bid against Hillary Clinton for the Democratic presidential nomination.

The Democratic senator from Vermont got 84 percent of his donations from small-dollar contributions, according to his filing. The self-described democratic socialist, who also leads in polling among declared candidates, spent $5 million in the same period.