The American people seem to approve his policies, although the Democrats are planning to strike back

Bolstered by a strong economy, Donald Trump reached the highest job approval rating of his career in the latest ABC News/Washington Post poll and runs competitively for re-election against four of five possible Democratic contenders. Yet he remains broadly unpopular across personal and professional measures, marking his vulnerabilities in the 2020 election.

Forty-four percent of Americans approve of Trump’s overall job performance, up a slight 5 percentage points from April and 2 points better than his peak early in his presidency. Still, 53% disapprove, keeping him at majority disapproval continuously for his first two and a half years in office, a record for any president in modern polling. 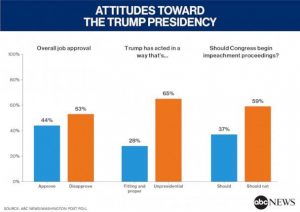