The two leaders are gearing up for Sunday’s elections

Greek PM Alexis Tsipras dubbed the upcoming elections on May 26 a” vote of confidence” for his government in an interview on Ant-1 TV on Tuesday morning.

“Sunday we have the European elections, but given the polarised situation, especially after the announcement of measures, is a vote of confidence in the measures”, he told the interviewers on Ant-1 morning current affairs show.

The PM opened his interview noting that “people are aware of the difficulties we [government] have brought with us”, confessing he was expecting a different situation from what he was faced when he assumed office.

Asked about the possibility of national elections before October, Mr. Tsipras said that “it does not matter when the elections take place”, adding that “the first and the second half are very close”. 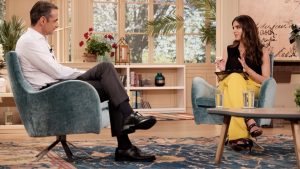 Meanwhile, New Democracy (ND) President Kyriakos Mitsotakis laid out his party’s priorities for Greece in an interview on Tuesday morning on Alpha TV.

Mr Mitsotakis appeared certain that the people would trust New Democracy in the elections.
The ND leader said his priorities were tax reform and tax cuts, reforms in education such as the abolition of asylum in universities and the simplification of the business framework.

“If they (voters) trust us, they should feel certain we will immediately get to work. I believe political conclusions will be drawn from the election results on May 26. I would like the result to be so clear that we can be led as soon as possible to national elections”, Kyriakos Mitsotakis said.

“The country cannot handle a prolonged pre-election period”, he said, adding that if the difference is large enough he would call for the government to hold early national elections.

Referring to the government handouts and benefits, he reiterated that “it was not a 13th pension, but a pre-election allowance. Many times a pension can be the only income in a household. The issue is how we can find work for their children and grandchildren. The government has over-taxed the middle class in order to be able to pay bonuses and allowances”.