Greek Prime Minister Alexis Tsipras has met with his British counterpart Theresa May to talk about the economy, investments & the return of the Parthenon Marbles

Prime Minister Alexis Tsipras has brought the campaign for the return of the Parthenon Marbles straight to the source in London.

Currently in Britain on a three-day visit, Tsipras met with his British counterpart Theresa May on Tuesday.

While the two leaders were meeting to discuss economic matters and the future of British investment into Greece, he took the opportunity to raise the matter of the country’s demand for the return of the Parthenon Marbles, which are currently held in the British Museum.

Speaking to the media after their meeting, Tsipras revealed that he told May the issue pertaining to the repatriation of the Marbles is a moral matter for Greece. 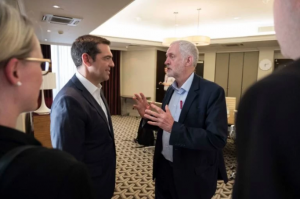 “The Marbles belong to the world’s cultural heritage, but their natural place is on the Parthenon [on the Acropolis in Athens],” he said.

The meeting follows Greece’s debt deal at the Eurogroup last week, for which May congratulated Tsipras and also acknowledged his role in the name agreement between Greece and the Former Yugoslav Republic of Macedonia (FYROM).

May used her official Twitter account to post a photo of her and Tsipras at Downing Street, declaring “Friendship between UK and Greece goes back centuries and is stronger today than it ever has been”.

On Monday the Greek PM met with Archbishop Gregorios of Thyateira and Great Britain and spoke at the Hellenic Centre of London in the presence of young Greek scientists who left Greece as a result of the crisis. 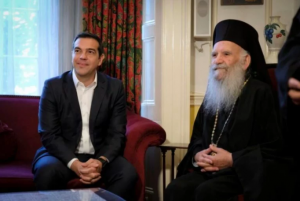 Tsipras has faced some opposition while abroad. A small number of protesters gathering at the Hellenic Centre, where they were heard chanting “traitor” along with slogans including “You sold Macedonia for 30 pieces of gold”. He faced a familiar scene at the Greek Embassy in London, where protesters stood with Greek flags and a sign reading “traitors” in Greek.

After his visit with May, Tsipras also met with opposition leader Jeremy Corbyn, and to conclude on Wednesday is scheduled to speak at the London Business School.

To hear Tsipras’ statement to the media regarding the return of the Parthenon Marbles in full, in Greek, watch the video below: