The limits to Ankara’s aid

Squeezed by an army on the advance, Libya’s Government of National Accord (GNA) has reached for a lifeline across the Mediterranean in Ankara, which is planning to send special forces, drones and other assistance to Tripoli. But while Turkey’s military support will help keep the GNA afloat in Tripoli with an eye to ensuring it remains part of any future Libyan political system, it’s unlikely to move the needle enough to halt the opposing Libyan National Army’s (LNA) offensive on the city entirely. More to the point, LNA leader Khalifa Hifter’s foreign backers are likely to respond to Turkey’s move by increasing support for the field marshal — meaning that, in the long run, Ankara’s involvement in Libya runs a high risk of encountering mission creep. 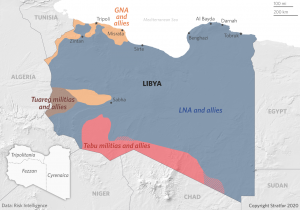 When Hifter launched his offensive in April 2019 on Tripoli, he intended to go for the GNA’s jugular in Tripoli before opposing forces could mobilize in defense. Furthermore, he hoped that the militias in the northwestern region of Tripolitania would fracture and that some of them, such as the Madkhali Salafists, would join his cause against the GNA and other fighting groups. The field marshal’s plans quickly went awry, as his opponents quickly mobilized with greater coordination than anticipated. (Some Madkhali Salafists in Sirte, however, did aid the LNA in its takeover of that city on Jan. 6.)