Syrian state media are reporting that troops of President al Assad’s Arab Syrian Army entered the town of Manbij on Monday setting the stage for a possible military showdown with Turkish forces advancing on the town.

“Army units have entered Manbij,” a local official was quoted by SANA news agency as saying. The same official said the town, controlled by a military council linked to the Kurdish authorities, confirmed to the French Agency the troops’ entry into the town and their “deployment on the front lines”.

Syrian government forces backed by Russian forces quickly took advantage of the sudden withdrawal of US troops from Syria after the Turkish invasion, and have deployed deep inside the Kurdish-controlled territory south of the Turkish border.

According to a video, the Turkish army and their Syrian allies, who were on the outskirts of Manbij on Monday morning, are preparing to enter the city.

Earlier, Turkish President Recep Tayyip Erdogan appeared intransigent stating from Baku in Azerbaijan that Turkey was determined to continue “until the end”. 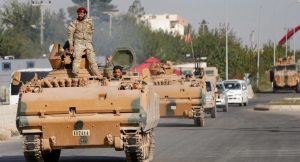 “We are determined to continue the business to the end, without paying attention to threats. We will, of course, finish the job we started. Our fight will continue until the final victory”, he said, defying international calls to halt his military incursion into Syria. The Turkish President also called on NATO to make clear if it supported an ally like Turkey or “terrorists”, as he dubs the Kurdish fighters.