Turkish media were quick to stoke the flames of tension

Ankara is escalating its provocations against Greece in the Aegean Sea after the Turkish Foreign Ministry claimed in a statement that the Greek frigate “Nikiphoros Fokas” harassed the Turkish seismographic research/survey vessel. The statement came a day after Turkey issued a navigational telex (NAVTEX) on October 16 to announce that Turkish survey vessel Barbaros would be operating in a segment of the Greek continental shelf. Greece called the act by Turkey “illegal” and a “provocation.”

Turkish media were quick to stoke the flames of tension making reference to “harassment” on the part of the Greek ship, arguing that the “incident” took place in international waters, violating international maritime law. However, the Pentagon in Athens said there was no incident at all in the area.
At the same time, Turkey’s Foreign Ministry responded to the bulletin released by the Greek Foreign Ministry calling it “unfounded based on international law”. 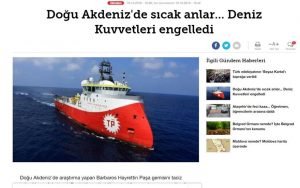 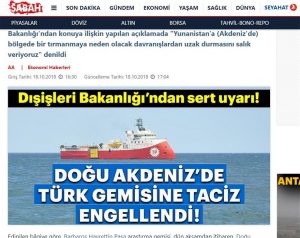 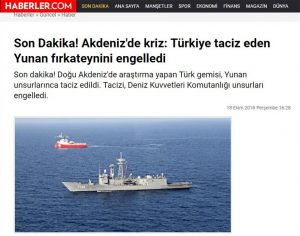