The Turkish military had prepared to bring back home eight soldiers who fled to Greece in the aftermath of a failed coup in Turkey, secret documents have revealed.

According to confidential documents obtained by Nordic Monitor, the Turkish General Staff transmitted orders to the Land Forces Command and aviation units on July 16, 2016 at 16:15 hours instructing them to execute a plan to bring a helicopter and the eight Turkish soldiers back from Greece. The military attaché at the embassy in Athens was also informed of the order.

According to the documents the Land Forces Command made contact with the Greek side after a Sikorsky helicopter was used by the Turkish soldiers to flee a post-failed-coup crackdown in Turkey. According to the intelligence memo, Greek authorities agreed to return not only the helicopter but also the eight Turkish officers who fled to avoid torture, ill treatment and possible death at the hands of the Turkish military and police. 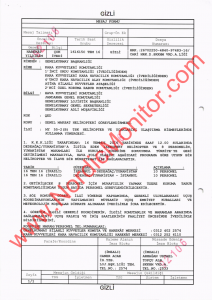 The order confirms a message shared by Turkish Foreign Minister Mevlüt Çavuşoğlu on Twitter at 17:15 hours on July 16 in which he said he had spoken to then-Greek Foreign Minister Nikos Kotzias on the phone and claimed Kotzias assured him that Greece would return the eight soldiers as soon as possible.