Turkey’s “persistent policy of violating international law and breaching international rules and regulations” was called out in a November 14 letter to UN Secretary General António Guterres by Polly Ioannou, the deputy permanent representative of Cyprus to the UN.

“[it] is a constant threat to international peace and security, has a negative impact on regional stability, jeopardises the safety of international civil aviation, creates difficulties for air traffic over Cyprus and prevents the creation of an enabling environment in which to conduct the Cyprus peace process.”

The letter followed reports in August about Turkish violations of Greek airspace over the northeastern, central and southeastern parts of the Aegean Sea, and four instances of Turkey violating aviation norms by infringing on the Athens Flight Information Region (AFIR). Similar reports emerged in June of Turkey violating Greek AFIR by conducting unauthorized flights over the southern Aegean islets of Mavra, Levitha, Kinaros and Agathonisi.

In April 2017, Turkish European Affairs Minister Omer Celik claimed in an interview that Agathonisi was Turkish territory. A day earlier, a different Turkish minister announced that Turkey “would not allow Greece to establish a status of ‘fait accompli’ in the ‘disputed’ regions in the Aegean Sea.” In December 2017, Greek Deputy Minister of Shipping Nektarios Santonirios reportedly “presented a plan to populate a number of uninhabited eastern Aegean islands to deter Turkish claims to the land.”

According to a recent statement from Greece’s Ministry of Foreign Affairs:

“Greek-Turkish disputes over the Aegean continental shelf date back to November 1973, when the Turkish Government Gazette published a decision to grant the Turkish national petroleum company permits to conduct research in the Greek continental shelf west of Greek islands in the Eastern Aegean.

“Since then, the repeated Turkish attempts to violate Greece’s sovereign rights on the continental shelf have become a serious source of friction in the two countries’ bilateral relations, even bringing them close to war (1974, 1976, 1987).” 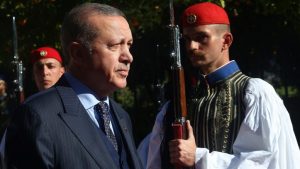 This friction has only increased with the authoritarian rule of Turkish President Recep Tayyip Erdogan, particularly since, as Uzay Bulut notes:

There is one issue on which Turkey’s ruling Justice and Development Party (AKP) and its main opposition, the Republican People’s Party (CHP), are in complete agreement: The conviction that the Greek islands are occupied Turkish territory and must be reconquered. So strong is this determination that the leaders of both parties have openly threatened to invade the Aegean.

The only conflict on this issue between the two parties is in competing to prove which is more powerful and patriotic, and which possesses the courage to carry out the threat against Greece. While the CHP is accusing President Recep Tayyip Erdoğan’s AKP party of enabling Greece to occupy Turkish lands, the AKP is attacking the CHP, Turkey’s founding party, for allowing Greece to take the islands through the 1924 Treaty of Lausanne, the 1932 Turkish-Italian Agreements, and the 1947 Paris Treaty, which recognized the islands of the Aegean as Greek territory.

This has been Turkish policy despite the fact that both Greece and Turkey have been members of NATO since 1952. Greece became a member of the European Union in 1981 — a status that Turkey has spent decades failing to achieve, mainly due to its human-rights violations.

Recently, EU and Turkish officials met in Brussels on November 30 to discuss an intelligence-sharing agreement between the European Police Service (Europol) and Ankara. Such an agreement is reportedly one of 72 requirements that Ankara would have to meet in order to receive visa-free travel to the Schengen zone.

Ankara’s ongoing challenges to Greek land and sea sovereignty are additional reasons to keep it from enjoying full acceptance in Europe and the rest of the West.