Turkish Minister on Foreign Affairs Mevlut Cavusoglu warned Greek Defence Minister Panos Kammenos to “come to his senses” over the Imia isles, following the latter’s statements that Imia “was Greek territory and a visit to the region by any Greek citizen was similar to taking a stroll in his house.” In an provocative interview to Turkish newspaper “Hurriyet”, Mr. Cavusoglu warns that an “accident” over the islands would cause irreparable damage, accusing the Greek side of acting irresponsibly in contrast to Turkey which is adopting a more sensible stance to de-escalate tensions. “That Minister (Kammenos) is constantly provoking. Greece is continuously provoking”, he said. The Greek Defence Minister, who flew over Imia and threw a wreath in commemoration of the three dead Greek officers in the 1996 crisis with Turkey, made it clear in an interview on Ant-1 TV’s nightly news bulletin that Imia was Greek territory and that the morale of the Greek army was high. Mr. Kammenos accused Turkey of constantly violating international law and treaties by her provocations in the Aegean Sea. 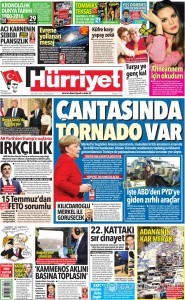