Hulusi Akar flew over the Aegean with a training aircraft

Turkish Defense Minister Hulusi Akar made some new provocative statements on Tuesday morning regarding his country’s stance on the southeastern Mediterranean and the Cypriot Exclusive Economic Zone (EEZ).
On occasion of the start of the new year for the Turkish pilots’ academy in Smyrna, Mr Akar said in a speech that although Turkey was in favour of resolving problems under international law, bilateral agreements and amicable relations, “this stance should not be regarded as a weakness or a concession. We will not allow any fait accompli.”
“We will not allow the usurpation of the rights of Turkey and the Turkish Cypriots. Our preparations have been completed accordingly. This is not a threat. We want good neighbourly relations but we also want appropriate behaviour from the other side. Fatih, Barbaros, Yavuz, and Oruc Reis are continuing their activities. The Navy and the Air Force have supported this effort and will continue to do so. We will do whatever we need for our rights,” concluded the Turkish defence minister.

According to the Hurriyet newspaper, the Turkish Defence Minister flew over the Aegean with a training aircraft T-38. 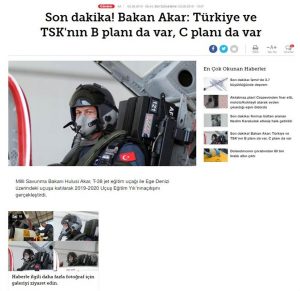