UPDATE: The second pilot has been confirmed dead.

New video of the crash has surfaced.

Media outlets have reported that the pilots were able to safely eject, but the crash has started a forest fire in the area. Rescue service troops have arrived at the site of the incident.

According to the German newspaper Die Welt, two warplanes belonging to the German Armed Forces have crashed into one another near the Fleesensee in the north of the country. The aircraft reportedly belong to the Tactical Air Force Wing 73 “Steinhoff”.

DPA also reported that one pilot had landed in the forests near the municipality of Jabel, and the second one near Nossentiner Hütte.

The magazine Focus reported that one of the pilots has been found alive while another is yet to be located.

The spokeswoman for the Interior Ministry of Mecklenburg-Vorpommern has confirmed the accident, adding that the minister intends to visit the site of the catastrophe. Witnesses have told the media that the crash caused a very loud bang at 2 p.m. local time (at midday GMT). In the meantime, the newspaper Schweriner Volkszeitung has reported that some debris has fallen on the towns nearby. 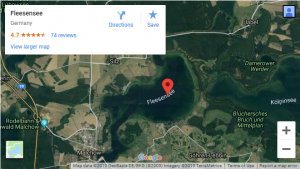