The US ambassador to Athens Geoffrey Pyatt met with the head of the Greek Orthodox Church, Archbishop of Athens and all of Greece, Ieronymos at the Holy Archdiocese of Athens on Friday.

Following the meeting, the US ambassador said in a statement that among the topics discussed was the issue of Ukraine, stressing that the US acknowledged the wisdom with which the Archbishop acted in regonising the independence of the Ukrainian Orthodox Church. 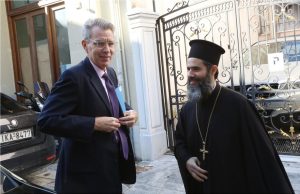 The US Ambassador handed the Greek Church head a letter from Samuel D. Brownback, US Ambassador at Large for International Religious Freedom, with whom Ieronymos met on May 6, congratulating him and the Church of Greece for the recognition of the Autocephalous Church of Ukraine. 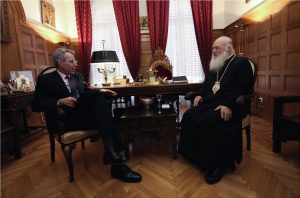 The Archbishop described the issue as one of the highest significance that he and the Church in the Ecumenical Patriarchate were tasked with addressing because it is the Mother Church that grants the autocephaly. Mr. Pyatt said that the Church of Greece has paved the way, and after the Patriarchate of Alexandria the rest of the Orthodox Churches would follow in its footsteps.

During the meeting, the Archbishop alluded, according to church circles, to the migration issue, pointing out that the borders for Greece were not only Macedonia and Thrace but mainly the maritime borders considered as the most difficult to guard calling for substantial aid and assistance from European partners and the Americans. He also focused on the need for a fairer distribution within the European Union and for Europeans to show more solidarity.

According to Church sources, Ieronymos told the US Ambassador that Turkey could not continue to blackmail Greece with the migrant issue by threatening to allow large numbers of migrants to enter Greece.

The recognition by the Greek Church of the autocephaly of the new Ukrainian Church caused a rift with the Patriarch of Russia Kirill leading to a break of communion with Ieronymos.