US citizens across the country’s 50 states and Washington district have started casting their ballots from 7am (Greek time), Tuesday, November 8, to choose the 45th President between Democratic candidate Hillary Clinton and Republican nominee Donald Trump. Although most polls gave Clinton a clear lead, pundits believe it could turn out to be a much closer battle, especially after the revelations of the Jonh Podesta e-mails, which influenced the most recent polls, showing both candidates virtually tied. Voting stations are scheduled to close at 3am (Greek time) on Wednesday, November 9. There will be a real time depiction of the results of both candidates in each state for the first time, as new a company called “VoteCastr” will be providing data from all polling stations across the US. It should be reminded that the President of the United States is not directly elected by the citizens, but by the electors. The citizens choose the electors in each state, who in turn pledge to vote for a particular candidate. The total number of electors is 538 and the candidate that managers to win at least 270 pledges is elected. In the event of a draw between the two candidates, the House of Representatives will select the President. These are the 14 states considered to be the key in the outcome of the election: 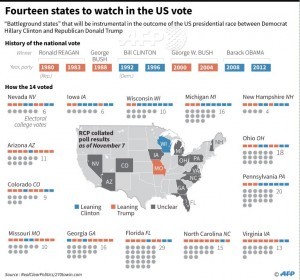