As Khalifa Haftar’s militia pushes deeper into Tripoli, Americans in the capital to help the UN-backed government are being whisked to safety

Factions of the Libyan National Army (LNA), led by hardline General Khalifa Haftar, have made a thrust into Tripoli and have claimed to have taken control of Tripoli International Airport, which hasn’t been anywhere near fully functional since 2014. The UN-backed Libyan government calls Tripoli home, whereas Haftar has amassed his power largely in the eastern and southern stretches of Libya. Last week, Haftar—who enjoys varying degrees support from the UAE, Egypt, Saudi Arabia, and Russia—ordered his militias to take the Libyan Government’s seat of power in what could be a far more decisive military operation than most expected it to be.

On Saturday, April 6th, 2019 the UN Security Council demanded Haftar stop his military push into Tripoli and to de-escalate the growing military crisis that could see various militia factions pour into Tripoli for what would be another bloody battle for the war-torn city.

Video has now emerged showing U.S. Navy Landing Craft Air Cushion (LCAC) hovercraft approaching and landing on the beach in the town of Janzour, which is located just a few miles to the west of Tripoli. The LCACs supposedly landed, loaded-up, and left the area. U.S. Marines also likely supported the operation by providing additional security.

#US army boats seen near Janzour coastal town, which is just west of #Tripoli. #Libya pic.twitter.com/oZanUcocjf

Footage of U.S Africa command personnel being evacuated from Libya to a U.S navy ship in the Mediterranean this morning #Libya #Tripoli pic.twitter.com/BsuMo9PbPC 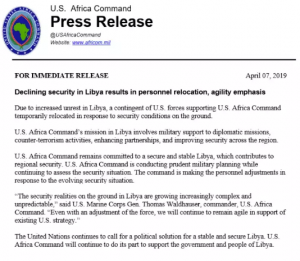 An official statement from U.S. Africa Command says that personnel were “relocated” as a result of the deteriorating security situation.

Heavy clashes on the southeast outskirts of Tripoli, #Libya. pic.twitter.com/jNeovemqCy