U.S. Secretary of State Mike Pompeo said U.S. law requires sanctions against Turkey for its purchase of Russian air defence missiles and expressed confidence the White House would comply with the law, the Washington Post reported on Sunday.

U.S. officials have repeatedly stated that the S-400s pose a threat to U.S. and NATO defences, warning of sanctions as well as Turkey’s possible expulsion from the program to build and operate F-35 stealth fighters. Turkey began taking delivery of S-400 systems on Friday, and as of Sunday had accepted seven shipments. 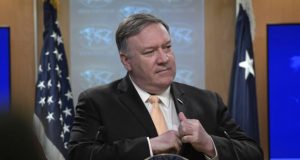 U.S. law mandates sanctions against countries that make significant deals with Russia’s defence industry, but Trump has sent mixed signals about how he might respond to Turkey, according to the Washington Post.