Washington on Tuesday continued to show its heightened irritation over the leftist Greek government’s recently passed law to conditionally release disabled convicts, an initiative that could include notorious “November 17” terrorist Savvas Xiros.

A day after US Secretary of State John Kerry brought the issue up with a visiting Greek foreign minister in Washington, the State Department turned its attention to Savvas Xiros’ jailed brother, Christodoulos, and another ultra-Marxist urban terrorist, Nikos Maziotis.

A notice that reads “Terrorist Designations of Christodoulos Xiros and Nikolaos Maziotis” was posted on Tuesday on the State Department’s website. The law, amongst the first tabled by the SYRIZA government in Parliament, also generated comments by the US ambassador to Greece David Pearce, who decried the prospect of Xiros substituting his prison cell for home custody and an ankle monitor.

“The U.S. Department of State has designated Christodoulos Xiros and Nikolaos Maziotis under Executive Order 13224, which targets terrorists and those providing support to terrorists or acts of terrorism. As a result of these designations, all property subject to U.S. jurisdiction in which Xiros and Maziotis have any interest is blocked and any assets they may have under U.S. jurisdiction are frozen.

U.S. persons are generally prohibited from engaging in any transactions with Xiros and Maziotis, or to their benefit. Christodoulos Xiros was one of the chief assassins of 17 November, until his arrest in 2002. In January 2014, Xiros was serving multiple life terms at the Korydallos Prison near Athens, Greece, when he disappeared while on furlough from the prison, after being granted temporary leave to visit his family in northern Greece. 17 November was active beginning in the 1970s through the early 2000s, claiming attacks against Greek politicians and businessmen, as well as Western interests.

After his escape, he publicized a manifesto focusing on his discontent with the Greek government. Xiros was re-arrested by Greek police in January 2015 while planning to carry out armed assaults in Greece, possibly with the intent to free other prisoners.

At the time of his arrest, Xiros was likely coordinating with members of Conspiracy of Fire Nuclei, a group designated by the State Department under E.O. 13224 in 2011. Nikolaos Maziotis is the leader of the Greek terrorist organization, Revolutionary Struggle. He was arrested with six other alleged members of Revolutionary Struggle in 2010, but went missing in the middle of his trial.

In April 2014, under the leadership of Maziotis, Revolutionary Struggle claimed responsibility for a bomb blast in central Athens outside the branch offices of the Greek central bank. On July 16, 2014, Maziotis was re-arrested by Greek police after a shootout in Athens’ central tourist district, which left four people wounded. Revolutionary Struggle was designated a foreign terrorist organization by the U.S. Department of State on May 18, 2009 and is most well-known for a rocket-propelled grenade attack on the U.S. Embassy in Athens in 2007.

The Department of State took this action in consultation with the Departments of Justice and the Treasury. We will continue to take such actions against terrorists and terrorist groups in Greece and elsewhere.” 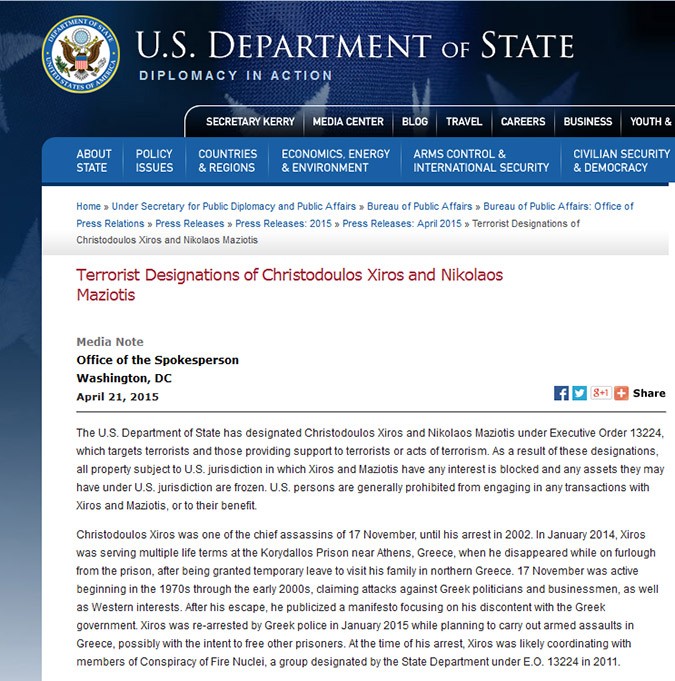