Usain Bolt completed a Rio 2016 sprint double by winning the 200m. Bolt’s eighth Olympic title came in a time of 19.78 seconds, and the Jamaican has one final chance to win gold in Friday’s 4x100m relay final. Afterwards, Bolt declared it his last individual race at the Olympics ahead of his retirement next year. He can add another medal in the 4×100 relay final on Friday. “I don’t need to prove anything else. What else can I do to prove to the world I am the greatest?” said Bolt. “I am trying to be one of the greatest. Be among [Muhammad] Ali and Pelé. I hope to be in that bracket after these Games.” 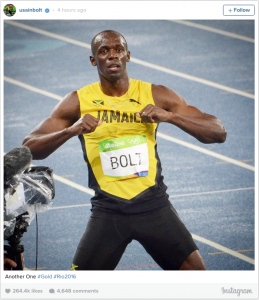